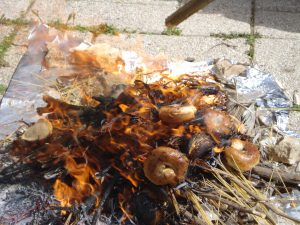 We were previously taught in Mishna Pesachim 2:1 (see Pesachim 21a) that while Rabbi Yehuda ruled that ביעור חמץ may only be done by burning the chametz, the Sages disagreed and ruled that chametz may also be disposed of by being crumbled and scattered to the wind, or crumbled and thrown into the sea.

Continuing on this theme, today’s daf (Pesachim 28a) begins by analysing the position of Rabbi Yehuda who draws a comparison between chametz (which we are forbidden to ‘leave over’), and נותר – sacrificial meat whose time for consumption has passed (and which the Torah also forbids to ‘leave over’) which is then burnt. On this basis, Rabbi Yehuda rules that just as נותר must be burnt, so too must chametz.

To this, the Sages respond that Rabbi Yehuda’s reasoning is inconsistent and outright faulty. This is because the Torah also forbids the אשם תלוי offering to be ‘left over’, yet in that case, Rabbi Yehuda himself rules that its remnants need only be buried and need not be burnt (see Temurah 34a).

Undoubtedly, this challenge is a compelling ‘come back’. Moreover, the very fact that the Sages use Rabbi Yehuda’s own ruling to counter his position inspires three different Amoraim to poetically express the irony of this come back. For Rav Yosef, this is like someone who burns their tongue from a plate of food that they themselves have hollowed out. For Abaye, it is similar to someone who sits in shackles that they themselves have made. And for Rava, it is comparable to someone who is killed with the arrows they have made through their own handiwork.

Given this dramatic refutation we would certainly not expect the law to be in accordance with Rabbi Yehuda, and the Rambam (Commentary to the Mishna, Hilchot Chametz U’Matzah 3:11) and the Shulchan Aruch (Orach Chaim 445:1) clearly rule in accordance with the Sages.

Yet, both Rashi and Tosfot rule like Rabbi Yehuda, and the Rema, along with the Taz and the Mishna Berura, write that the custom is in accordance with Rabbi Yehuda. But especially given the compelling critique directed towards Rabbi Yehuda by the Sages, why do they do so?

To this, the Rosh (Pesachim 2:3) replies that while the Sages critique of Rabbi Yehuda was valid, there are a variety of justifiable halachic ‘come backs’ that he himself could have employed. Moreover, both the Rosh and the Taz explain that when it comes to chametz, there is a tendency to adopt the stricter approach which means that while the Sages may be correct, normative Jewish practice is to adopt the stricter position of Rabbi Yehuda.

However, as implied by the Maharil (quoted by the Mishna Berura OC 445:7), perhaps a further reason why the custom to burn chametz became so widespread is because – unlike throwing chametz crumbs to the wind – burning chametz is ‘an event’ which also reminded people to recite the ביטול חמץ formula, and given the importance of doing so, common custom reflected this stricter position to encourage the community to ensure that they removed and nullified all chametz in their home. Simply put, while halacha-in-theory supports the Sages, at least in many communities, halacha-as-lived reflected the position of Rabbi Yehuda.

What I believe we can learn from this is that while halacha-in-theory is rightly based on halachic texts and proofs, halacha-as-lived is often reflective of wider social considerations. And thus, while normative halacha is in accordance with the Sages, normative practice – at least in many communities – is in accordance with Rabbi Yehuda.