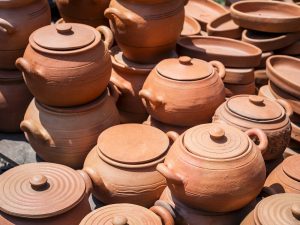 In today’s daf (Pesachim 30a) we are informed of Rav’s position that earthenware dishes which previously absorbed chametz flavour may not be used after Pesach and must therefore be broken prior to the onset of Pesach. This is because Rav is of the opinion that chametz flavour retained in earthenware dishes can imbue a trace of chametz flavour in the food placed inside them after Pesach, and notwithstanding the fact that this trace of chametz flavour may have spoilt over time, it is still forbidden.
We are then told that Shmuel disagreed with Rav, and that he ruled that earthenware dishes ‘need not be broken’ prior to Pesach. This is because any trace of chametz flavour that may remain inside these earthenware dishes would be annulled by the flavour of the food subsequently placed in the dish.
In general, halachic debates such as this, where one Sage holds one view, and another Sage holds another view are not unusual both in the time of the Gemara, and today. However, in this case a consequence of Rav’s view was that those who adopted his position would purchase new earthenware dishes after Pesach, which made it very tempting for the local potters to increase their prices around that time in order to maximise their profits during this period of high demand.
Given this possibility, Shmuel made it clear to potters and storeowners that were this to occur, he would actively publicize his position that dishes need not be replaced after Pesach – both in communities where only a minority of people adopted Rav’s stricter view, as well as in Sura where Rav was the spiritual head.
For some people, such an intervention is hard to fathom because surely it was not the place of Shmuel to actively promote his halachic opinion in communities which follow the rulings of Rav. However, as succinctly expressed by Rabbi Jay Kelman, what we learn from Shmuel’s actions is that ‘communal welfare must come before local rabbinic authority’.
Clearly, this principle has may important applications especially in the field of price gouging. Yet beyond its application, there is a simple fact that is undoubtedly worthy of consideration which is that notwithstanding his greatness in Torah, Shmuel was aware of the price increases of earthenware dishes – both in his community, as well as in other communities as well.
Reflecting on the role of the contemporary Rabbi, Rabbi Sacks zt’l once observed that: ‘The rabbi, as educator and all the more as posek, must be rooted in the economic and social realities of those for whom he is responsible. This unstated axiom is implicit in almost every dimension of rabbinic law, based as it is on a shrewd perception of human psychology and the strains to which the Torah is exposed in everyday life.’ Moreover, as he notes elsewhere, ‘Rabbi Joshua once suggested that Rabban Gamliel’s capacity to lead the Jewish community was compromised by his ignorance of the economic conditions in which they lived.’
Given this, Rabbi Sacks firmly believed that for religious leaders to effectively function, they need to understand the social and economic conditions of the age, and he warned contemporary Rabbis that their ‘limited worldly experience’ may make their teachings and rulings ‘dangerously irrelevant’, or may lead them ‘to rule incorrectly’. As he said, ‘if we are to apply Torah to the world, we must understand the world.’
Ultimately, a great religious leader must understand the social, economic, intellectual and cultural circumstances of their time, and like Shmuel in this episode, they must harness this knowledge to assist not only members of their community, but those beyond their community as well.
×
×