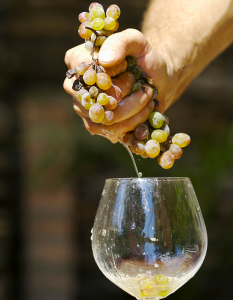 Within today’s daf (Pesachim 33b) we find a curious discussion about the spiritual status of the juice squeezed from grapes that are טמא.

According to one position attributed to Rav Yochanan, the juice in grapes is מפקיד פקידי – meaning that it is stored inside the grape, but is not part of the grape – as if the juice is kept apart in its own container. Consequently, it is possible for a grape to be טמא, but for its juice to remain טהור.

Contrasting this, the position attributed to Rav Chisda states that the juice in grapes is מיבלע בליעי – meaning that it is absorbed within and is part of the grape. According to this reasoning, if a grape is טמא, then so too is its juice.

Reflecting on this debate, I came to realise that the contrast between מפקיד פקידי and מיבלע בליעי equally applies to the way we relate to our Judaism.

There are those Jews whose Judaism is undoubtedly an important part of their inner selves. However, it is מפקיד פקידי – meaning that it is not all encompassing but is, instead, ‘contained’ within certain parts of their life such as Shabbat, Kashrut, and Tefillah.

Towards the end of Massechet Makkot (Makkot 23b), Rabbi Simlai teaches that the 613 mitzvot found in the Torah can be divided into the 365 ‘negative’ mitzvot (i.e. the things we are instructed ‘not’ to do) and the 248 ‘positive’ mitzvot (i.e. the things we are instructed to do), and he explains that the 365 ‘negative’ mitzvot correspond to the days of the year, while the 248 ‘positive’ mitzvot correspond to the limbs of our body. According to this approach, Judaism isn’t just a part of some of our days or felt in part of our life. Instead, it is all encompassing and is palpable and expressed in every limb of our body and in every day of our lives.

In past generations, Jews would speak about their Judaism coming from their ‘kishkes’. For them, Judaism was מיבלע בליעי. Today, however, many Jews, including those who are ‘observant’ Jews, often narrow their Judaism to specific moments of their week. To them it is מפקיד פקידי.

But while this may work for a grape, ultimately, this doesn’t work for a person. And why? Because if Judaism is not fully integrated into life, then prayer is not fully reflective of all aspects of our life. And prayer which doesn’t speak about our real needs cannot, ultimately, be true prayer.