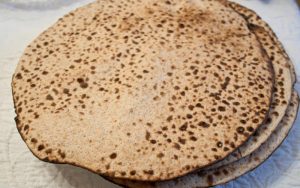 Devarim 16:3 describes matzah as לֶחֶם עֹנִי, and in today’s daf (Pesachim 36a), two different explanations are offered as to the meaning of this term.
According to Rabbi Akiva, since the word עֹנִי as spelt without a ‘vav’, it must refer to ‘poverty’ and thus the term לֶחֶם עֹנִי means ‘the bread of the poor’.
However, since the word עֹנִי is pronounced as if it has a ‘vav’ (i.e. עוני), Shmuel explains that it must refer to ‘answering’, and thus the term לֶחֶם עֹנִי means ‘bread over which we recite (Onin) many words’.
Significantly, this disagreement goes far beyond etymology and it actually seeks to address whether the eating of matzah is intended to evoke emotions associated with slavery and poverty, or whether it is meant to evoke words about the Exodus during the Seder service.
As the Ramban explains (in his commentary on Devarim 16:3), both opinions are correct. As he writes, matzah ‘alludes to two ideas’ simultaneously – namely the life of affliction in Egypt and the hasty redemption. In terms of matzah being eaten during the redemption, this is stated in Devarim 16:3. And in terms of it being consumed by Bnei Yisrael in Egypt, the Ramban states that this is stated in the opening ‘Ha Lachma Anya’ passage in the Haggadah where we are told that ‘this is the bread of affliction which our fathers ate in Egypt’.
Taking a different position is the Maharal (see Gevurot Hashem Ch. 51) who disagrees with the Ramban and who firmly asserts that Matzah is not the bread of affliction or poverty. Instead, it is solely the bread of redemption. As he says: ‘you will not find any source in Scripture, or Mishna or Talmud that states that the Egyptians fed Bnei Yisrael Matzah. On the contrary! [We find the exact opposite sentiment in] the Sifrei’s comments on Parshat Beha’alotecha. [There we read], ‘we still remember the fish we used to eat in Egypt at no cost’.
And what of Ramban’s ‘proof’ from the Ha Lachma Anya? Maharal answers this by explaining that the Ha Lachma Anya merely reflects the phraseology of a parent explaining the Seder night rituals to their family, and many parents knew no more than the fact that Bnei Yisrael were in Egypt. However, the more correct terms would be ‘this is the bread of affliction, which our fathers ate as they left Egypt’. Thus, according to the Maharal, the primary ‘identity’ of matzah is as ‘bread over which we recite (Onin) many words’
And why is this debate so important? Because just as one of ‘the stars of the show’ of Seder night is the matzah and thus it is essential to understand its meaning and identity, so too, among the ‘stars of the show’ of Massechet Pesachim is matzah, and consequently, this is why it is so important for the Gemara to consider its meaning and identity.
×
×