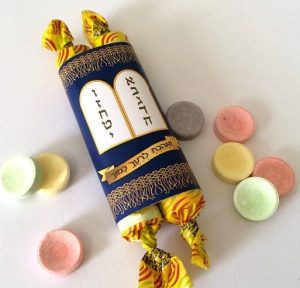 Much of today’s daf (Pesachim 44) explores the halachic principle of טעם כעיקר – which is the idea that we treat remnant flavour of a food as if it is the food itself.
According to the Sages, this principle is derived from a Beraita which states that a Nazir – who is forbidden to eat grapes (see Bemidbar 6:3) – may not drink water in which grapes had previously been soaked. Contrasting this, Rabbi Akiva claims that this principle is derived from the thrice stated Torah law of mixing meat and milk (“do not cook a kid in its mother’s milk” – Shemot 23:19, Shemot 34:26 & Devarim 14:21) since the mixed flavour of meat and milk is forbidden. Alternatively, he explains that we can also derive the law of טעם כעיקר from the prohibition of using the utensils that had previously been used by the Midianites to cook non-kosher food (see Bemidbar 31:23).
But what, fundamentally, is the principle of טעם כעיקר all about? I believe that it is – as we have previously mentioned with reference to Matzah (see Pesachim 36) and the Korban Pesach (see Pesachim 41) –that “food can communicate history and emotion”, meaning that the mere taste experience of a forbidden remnant flavour can be a gateway towards tasting – and wishing to experience – that food itself.
But if טעם כעיקר operates with forbidden food, surely it also operates with permitted food too? And if it operates with physical food, surely it also operates with spiritual food too?
Significantly, a major theme in Tanach and Chazal is to describe Torah learning as a taste experience. For example, Tehillim 119:66 statesטוּב טַעַם וָדַעַת לַמְּדֵנִי – “teach me good taste and knowledge”, and in one of the three Birkot HaTorah that we recite each morning, we ask God: וְהַעֲרֶב נָא ה’ אֱלֹקינוּ אֶת דִּבְרֵי תוֹרָתְךָ בְּפִֽינוּ וּבְפִי עַמְּךָ בֵּית יִשְׂרָאֵל – “please, Lord our God, make the words of Your Torah sweet in our mouth and in the mouth of Your people, the house of Israel”.
Of course, there are those Jews who have the opportunity to learn what we may refer to as עיקר תורה, i.e. real, substantive Torah (which is comparable to real, substantive food). However, there are many Jews who only encounter טעם תורה i.e. diluted or remnant Torah ideas (which is comparable to remnant flavour of a food) which they may, by-chance, encounter in their life. But just as טעם כעיקר teaches us that a remnant flavour can communicate history and emotion and can be a gateway towards tasting and wishing to experience that food itself, so too, we hope that those who experience even a brief טעם of Torah wish to do the same.
×
×