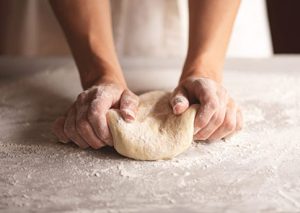 As we know, any act of baking dough on Pesach runs the risk of it rising and becoming chametz especially if it is not constantly being handled during the kneading process. Given this, we find a teaching from Rav in today’s daf (Pesachim 48) which states that there is a maximum amount of dough which should be prepared by anyone* on Pesach, which is the same quantity as the minimum amount of dough from which ‘challah’ is required to be taken (i.e. just over five quarters of a kav).
In response to this, Rav Yosef observes that the women in his community have the custom not to prepare dough on Pesach which is any larger than one ‘kepiza’ (i.e. three quarters of a kav).
Hearing this, Abaye objects to this custom because, by limiting themselves to a kepiza, those women’s stringency concerning dough that may become chametz meant that they were being lenient (i.e. by preparing this smaller amount of dough, this came at the cost of them not being obligated in taking challah).
Yet momentarily putting aside the answer that Rav Yosef subsequently provides, this objection of Abaye is hard to understand. Specifically, why are these women – who, seemingly due to their great fear of preparing dough on Pesach that may become chametz thereby felt the need to limit themselves to handling a smaller amount of dough – being criticized for the fact that a by-product of their act of piety was that they were no longer obligated to take challah?
In answering this question, some commentaries point to the Yerushalmi (Challah 3:1) which actually states that one should not deliberately prepare dough that is smaller than the minimum amount of dough from which ‘challah’ is required to be taken, and it is worthwhile noting that the Rambam actually codifies this as the halacha (Bikkurim 6:16).
However, it is important to note that this is not what Rav Yosef described about the women in his community. They had not deliberately avoided the mitzvah of challah. In fact, as Rav Yosef then proceeds to explain, the women in his community would ‘combine’ their dough in a basket so that challah could, in fact, be taken.
And this brings us back to Abaye’s objection and the question of why, since a compelling rationale exists as to why the women of Rav Yosef’s community acted as they did, were they criticized for doing so and even seemingly accused – if not directly, but certainly implicitly (as understood by numerous commentaries) – of acting in a way to avoid the fulfilment of the mitzvah of challah (which, as explained by Rav Yosef, they did not avoid fulfilling)?
I believe that to answer this question, we must note that Abaye’s comments were not directed at the women in Rav Yosef’s community, but rather, to Rav Yosef himself. Moreover, it seems clear (given the way in which he spoke of them) that the women in Rav Yosef’s community had been motivated for purely pious reasons. However, around the time of this exchange there was a rising trend of people not taking challah (as reflected by the Yerushalmi’s remarks). Given this, Abaye told Rav Yosef that the practice of women in his community preparing smaller amounts of dough on Pesach had, unfortunately, been used as a precedent by people in other communities who were less pious and who did wish to avoid fulfilling the mitzvah of challah (i.e. not just on Pesach). Given this, Abaye was telling Rav Yosef that – at least as a public relations exercise and for the long-term protection of the mitzvah of challah – he should be seen to object to this practice in his community.
Presuming this is a correct reading of what took place, then the conversation between Abaye and Rav Yosef was in some way contrived, and it was clearly intended for those who would hear about this exchange, and did not specifically relate to the women in Rav Yosef’s community.
Still, there is a cost of such exchanges, and to re-use the words of Abaye, the ‘stringency’ about protecting the mitzvah of challah came at the cost of the reputation of the pious women in Rav Yosef’s community.
Unfortunately, such ‘costs’ are not unknown to the modern period, and it is often the case that the sincere motivations of pious women are questioned because leaders feel the need to publicly object to certain practices performed by others who are less sincere. Yet as should be clear from our Gemara, such public relations exercises often cast an unfair, and untrue, shadow over the motivations of very good people. Which ultimately means that there is most probably a much better way to do things.
* nb. the question raised in the modern period is whether machines that prepare Matzah can use larger amounts of dough. For a good summary of opinions on this topic, see note 1 of the Dirshu commentary to the Mishna Brura on OC 456.
×
×