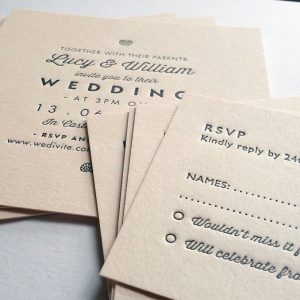 The Mishna (Pesachim 3:7) lists a number of places where a person may find themselves on the fourteenth of Nissan without having already removed their chametz including a סעודת אירוסין – a betrothal feast – and this leads the Gemara to (Pesachim 49a) to discuss whether attending a סעודת אירוסין is a רשות (optional) or a חובה (obligatory).
As the commentaries explain, during the time of the Gemara it was customary for there to be up to a year between אירוסין (betrothal) and נישואין (marriage) – during which time the couple were legally married but did not live together – and it seems from our Mishna that what is being discussed is the former. Still, as the Gemara then proceeds to explain, it seems that all agree that such a feast is considered a סעודת מצוה, while the opinion offered by Rabbi Yehuda that attending such a feast is a רשות (optional) actually refers to a secondary ‘feast of gifts’ that occurred soon after.
Interestingly, the Gemara then proceeds to discuss certain types of weddings, and which should or need not be attended. But putting aside what was done during the time of the Gemara (in terms of separating the betrothal and marriage), is attending a wedding feast truly considered a חובה (obligatory)?
Significantly, later on in Gemara Pesachim 113b it would seem that someone who does not attend a סעודת מצוה has committed a spiritual offence. However, as the Rema on Yoreh Deah 265:12 suggests, this remark is generally understood to be limited to the feast of a Brit Milah – which is why there is a custom to simply ‘inform’ friends and family of a Brit, rather than directly ‘invite’ them.
I mention all this in light of an interesting discussion in a recent edition of the Headlines podcast where the question was raised whether it is necessary to attend all barmitzvahs and weddings that one is invited to – given the significant time needed to prepare, travel and attend these smachot which often last many hours.
Of course, it is unfortunate that many people have had to significantly change their simcha plans during the past year, and I personally very much look forward to the time when it is safe to gather in larger numbers at which time I look forward to attending smachot of friends and family to sing, dance and bring joy to those celebrating. Nevertheless, prior to Corona there were those who were invited to many smachot – including those of people who they were not so close with – and the question they had to consider is what is their obligation in terms of attending a סעודת מצוה?
Though all agreed that attending the smachot of close family and friends is clearly necessary, a number of contributors were clear that there are times when other priorities need to be considered, and as Dovid Lichtenstein remarked, he limits himself to two additional weddings per year and to all other smachot that he doesn’t attend, he sends a gift. Explaining himself he remarked, ‘though that may be somewhat unpopular, its practical; attending a wedding can last 4-5 hours and it is a big decision one makes to attend given the time commitment. Yes, you may be less popular if you don’t attend every simcha, but you’ll accomplish a lot more’.
Overall, what we learn from today’s daf is that while smachot are wonderful personal events where great milestones are celebrated with others, the choice to attend smachot should be considered within our wider set of halachic and personal obligations.
Go to Top