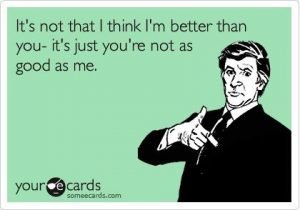 Today’s daf (Pesachim 55a) refers to the halachic concept of יוהרא (hubris) – which is the word used to describe the actions of those individuals who choose to practice laws or customs from which they are exempt, or to adopt certain religious behaviours that are not required by the halacha, as a means of suggesting that they are particularly pious.
For example, in light of the exemption given to a groom from reciting the Shema on his wedding night (see Mishna Brachot 2:5,8), the question is raised whether it is considered יוהרא for an individual groom to nevertheless do so since this suggests that he thinks that he is unlike most people and is, in fact, capable of achieving a sufficient level of kavanah (concentration) while reciting the Shema even on his wedding night?
Interestingly, as Tosfot (Brachot 17b DH Rav) explains, since nowdays so few people achieve a sufficient level of kavanah when reciting the Shema, it is actually considered יוהרא for a groom not to do so on his wedding night, because this implies that throughout the rest of the year, he does recite Shema with kavanah. What this goes to show is that there are many practices that were previously considered to be expressions of יוהרא which are now expressions of normative Jewish practice.
A great example of this can be found in the responsa of the Geonim (Sha’arei Teshuvah 98) who were asked whether it would be considered יוהרא for someone to hold their tzitzit when reciting the third paragraph of the Shema discussing tzizit? To this they replied that for this not to constitute יוהרא, we should also require people to touch their tefillin when reciting the portion of the Shema discussing tefillin, and to put their hand on the mezuzot in their homes when reciting the portion of the Shema discussing mezuzot! Thus they concluded that this should not be done. Today, however, normative Jewish practice is to hold the tzitzit when reciting the third paragraph of the Shema.
More broadly, and as the Maharshal explains (see Yam Shel Shlomo Bava Kamma 7:41, quoted by Magen Avraham OC 63:2), if someone publicly practices a חומרא(halachic stringency), then this too is considered to be expressive of יוהרא.
Today, as Rabbi Menashe Klein explains (Mishne Halachot 10:1), ‘we should be particularly careful about יוהרא. Unfortunately, there are things which people do which are undoubtedly expressive of יוהרא but which are considered by them to be perfectly permitted. Moreover, there are times when people use mitzvot for the sake of hubris or to impress others with whichever חומרא (stringency) that they have adopted. Not only is this problematic because such a person acts with hubris while doing so, but also because they use the fact that they have adopted these stringencies to denigrate their friends who (have not adopted those specific stringencies)… However, this was not the way of the earlier generations, where each person held fast to their own customs’ with sincerity and did not try to out-shine each other.
Ultimately, the lesson of יוהרא is that the practice of religious laws and customs is not free from ego, the pursuit of self-aggrandizement, and the temptation to denigrate or embarrass others. And so even – and especially – when choosing to adopt certain religious practices that differentiate you from others, much consideration must be given to the possibility whether, in fact, this desire is coming for the sake of God, or for the sake of self.
×
×