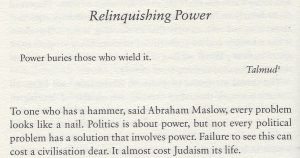 Today’s daf (Pesachim 57a) contains a number of stinging critiques towards spiritual leaders – including Kohanim Gedolim (High Priests) and members of their family – who used their position for personal gain and power. As the Gemara states elsewhere (Yoma 86b), ‘power buries those who wield it’.
Reflecting on this teaching, Rabbi Sacks remarks that ‘it is not accidental that the book of Exodus with its political themes – slavery, liberation, tyranny, freedom – is preceded by Genesis with its tales of family life, nor that the book of Ruth with its non-political message of love and loyalty is the historical prelude to the political books of Samuel and Kings. The function of these words is to emphasise the primacy of the personal over the political’ (Not in God’s Name p. 228).
In light of this, Rabbi Sacks makes the compelling argument that ‘religion is at its best when it relies on strength of argument and example. It is at its worst when it seeks to impose truth by force’ (p. 234), and most significantly, that ‘religion acquires influence when it relinquishes power’ (p. 236).
As he continues: ‘Religion – as understood by Abraham and those who followed him – is at its best when it resists the temptation of politics and opts instead for influence. For what it tells us is that civilisations are judged not by power but by their concern for the powerless; not by wealth but by how they treat the poor; not when they seek to become invulnerable but when they care for the vulnerable. Religion is not the voice of those who sit on earthly thrones but of those who, not seeking to wield power, are unafraid to criticise it when it corrupts those who hold it and diminishes those it is held against. Elijah was a great prophet. He was ‘zealous’ for God’s honour and bitterly opposed to the false prophets of Baal. He challenged them to a test on Mount Carmel. He won; they lost; the people were persuaded; the false prophets were killed – as convincing a demonstration of religious truth as any in the Bible. But the story (I Kgs 18-19) does not end there. Summoned by an angel to Mount Horeb, he witnesses an earthquake, a whirlwind and a raging fire. But ‘God was not in’ the earthquake or the wind or the fire. He came to Elijah in a ‘still, small voice’. When religion becomes an earthquake, a whirlwind, a fire, it can no longer hear the still small voice of God summoning us to freedom’ (pp. 236-237).
Ultimately, the stories found in today’s daf are striking and frightening examples of how ‘power buries those who wield it’ and of the dangers that exist when religion wields, and abuses, power. And though there are times when it is harder to associate the teachings found in the Gemara to our modern world, today’s daf remains both relevant and resonant to our world which, in so many ways, has yet to learn the lesson that ‘religion acquires influence when it relinquishes power’.
×
×