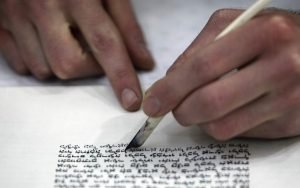 Given the commandment that the Korban Tamid be offered every day in the morning and afternoon (see Bemidbar 28:4), the Mishna (Pesachim 5:1) in today’s daf (Pesachim 58a) teaches us the time when the afternoon Korban Tamid was slaughtered and offered, and how these times were brought earlier on an Erev Pesach to ensure that there was sufficient time to subsequently bring the Korban Pesach.
Significantly, a core aspect of the bringing of the Korban Tamid – which literally means the ‘perpetual sacrifice’ – was its predictability and regularity, and it was this dependable ‘routine’ of the sacrificial worship that became a core aspect of daily prayer after the destruction of the Temple. In fact, in response to the question of which Torah verse contained the klal gadol baTorah – meaning ‘the great principle of the Torah’ – Ben Pazzi answered that this is found in Shemot 29:39 which states how the Korban Tamid was ‘offered in the morning, and… in the afternoon’.
However, while the Korban Tamid defined predictability and regularity, the Mishna in today’s daf informs us that the timing of its slaughter and offering needed to change on Erev Pesach and especially when Erev Pesach fell on Erev Shabbat. What this means is that even the most predictable and regular of offerings need to adapt in light of other considerations.
It is worthwhile noting that the art of finding the right balance between consistency and flexibility fascinated our Sages. For example, the Tur (Orach Chaim 1) opens by quoting Yehudah ben Tema who stated that we should be “as bold as a leopard” in the performance of the mitzvot – which is explained to mean that even if there are those who mock someone’s religious practice, they should stubbornly continue to faithfully and consistently serve God with the mitzvot. Similarly, the Vilna Gaon (Keter Rosh No. 51) states that ‘someone who is stubborn (in their spiritual growth) will succeed’. At the same time, Mishlei 17:20 states that ‘the stubborn heart will not be able to find goodness’, with this trait being powerfully expressed by Pharoh whose stubbornness led to his downfall (and whose position as מלך מצרים is – as pointed out by Rabbi Yehuda HaChassid – numerically equivalent to the word עקש, meaning ‘stubborn’). In fact, it is precisely given the possibility of becoming excessively and unhealthily unbending that Chazal taught us that we should ‘always be as flexible as a reed and not as unyielding as a cedar’ (Ta’anit 20a) – which is the reason given why the reed was chosen to become the utensil with which Torah scrolls, tefillin and mezuzot are written.
Having lived for almost a fully year through a global pandemic, each of our lives have been tested in a variety of ways – especially in terms of finding the right balance between consistency and flexibility. Personally, my tefillah and the daf have become my Korban Tamid – my daily anchor. At the same time, like all people I’ve needed to adapt and be flexible in a variety of ways. And thus, what we’ve learnt this past year, and what we see in today’s daf, is the same message – which is that there are times when even the most predictable and regular of actions need to adapt in light of other considerations.
Go to Top