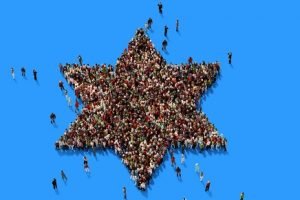 Toward the end of yesterday’s daf (Pesachim 66b), reference was made to the law of ‘Pesach Sheni’ concerning which we are told: אִישׁ אִישׁ כִּי יִהְיֶה טָמֵא לָנֶפֶשׁ – “If any person is ritually unclean from contact with the dead” and are therefore not spiritually suitable to participate in consuming the Korban Pesach, אוֹ בְדֶרֶךְ רְחֹקָה – “or is on a distant journey” and therefore cannot reach Yerushalayim to consume the Korban Pesach, “whether among you [now] or in future generations, then they shall still have the opportunity to prepare God’s Passover offering… [a month later] on the afternoon of the 14th of the second month (i.e. the 14th of Iyar)” (Bemidbar 9:10-11).

However, as Rav Yochanan explains there, and as discussed at length in today’s daf (Pesachim 67a), the fact that the verse makes reference to the situation of individuals becoming טָמֵא לָנֶפֶשׁ teaches us that איש נדחה לפסח שני – “when this occurs to an individual, then they must delay their consumption of the Korban Pesach until Pesach Sheni [on the 14th of Iyar]”, whereas אין ציבור נידחין לפסח שני – “if this occurs to a community, then they do not delay their consumption of the Korban Pesach until Pesach Sheni. [Instead, they join the rest of the people to consume the Korban Pesach on the 14th of Nissan]” though, as Abaye explains in today’s daf, this only applies in a situation when they are טָמֵא לָנֶפֶשׁ.

Still, while we have a biblical source explaining that Pesach Sheni only applies to individuals and not to a community who are טָמֵא לָנֶפֶשׁ, what is not precisely clear is the halachic mechanism why this is so (nb. see Pesachim 77a and 79b for more on this point).

This topic is addressed by the Lubavitcher Rebbe (in his חידושים וביאורים לש”ס), where – on the basis of the phrase אין ציבור נידחין לפסח שני – he explains that it is not that Pesach Sheni applies to a community but ithat n some cases they are allowed to participate in the regular Pesach. Instead, as he writes, ליכא פסח שני בציבור – meaning that “the whole concept of Pesach Sheni [only applies to individuals and] does not apply to a community”. And why is this so? I believe that the answer to this question is rooted in the very essence of the Korban Pesach as first offered by the Jewish people in Egypt.

But when a community were טָמֵא לָנֶפֶשׁ, though individually they may have needed to delay their participation until Pesach Sheni, by being a community they expressed the collective identity of the people. In such an instance, ליכא פסח שני, Pesach Sheni does not apply. And so, notwithstanding their individual spiritual status, the collective spiritual status of this community qualified them to participate in the consumption of the Korban Pesach on the 14th of Nissan – meaning the Pesach of the nation, not the Pesach for the individuals.