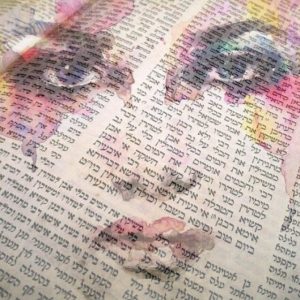 Towards the end of today’s daf (Pesachim 68b) we are told how Rav Sheshet (who, we should recall was blind and who was renowned for memorizing not only Mishnayot, but also Beraitot and Tosefotot) would not let a month go by without reviewing the Torah which he had learnt. Furthermore, he would often do so while standing and leaning against the bolt of his door – which the Chida (in his ‘Marit Ha’ayin’) explains as symbolizing the door to the world to come – so as to remind himself of the frailty of life and the importance of maximising all the moments we have in this world for the good. Beyond this, while reviewing his Torah, we are told that Rav Sheshet would often say to himself “Rejoice my soul! Rejoice my soul! For you have I read! For you have I studied!”.
According to many commentaries, when Rav Sheshet refers to “my soul”, he is referring to his own soul – meaning that Rav Sheshet only regarded his Torah study to be beneficial himself. However, I would like to offer a different interpretation of Rav Sheshet’s words in light of a stunning story told in the Menorat HaMaor (Ner 3, Klal 8, Part III), which itself is based on a Midrash Tanchuma:
‘A story is told of a pious man who lived alone in a particular place and who learnt Massechet (Tractate) Chagigah. In fact, he learnt it and reviewed it so many times until he knew it so well that he could recite it by heart. The man did not know any other Massechet from the Talmud, but instead, he continued reviewing this one Massechet throughout his life. When he left this world, he was alone in his home and nobody knew that he had died. At that moment, a figure of a woman appeared, she stood over him, and she raised her voice wailing and lamenting. In fact, she sighed and wailed so profusely that a large crowd gathered to whom she instructed: “Eulogize this pious man and bury him! Give honour to his coffin and you will merit the world to come, for this man honoured me his entire life! Thanks to him, I was not abandoned or forgotten.” Immediately, all the women gathered round and sat with her, and an enormous funeral was held. The men tended to the shrouds and all the other burial requirements, and they buried him with great honour. Meanwhile, the mysterious woman continued to weep and wail. They asked her, “What is your name?”, to which she replied, “My name is Chagigah.” As soon as the pious man was buried, the woman disappeared and the people then realized that it was, indeed, Massechet Chagigah that had appeared in the form of a woman and who had come at the time of his passing to lament and weep over him and to see that he was buried with honour – because he had reviewed this Massechet continually and dedicated himself to its study.’
Personally, I see many similarities between this story and that of Rav Sheshet, and I believe that it can provide us with a new and exquisite perspective to explain the words of Rav Sheshet.
Like the man in the story, Rav Sheshet regularly reviewed his Torah learning and through doing so, he established a deep connection and affection with those words of Torah. Also, like the man in the story, Rav Sheshet maintained a strong awareness of the frailty of life and the importance of maximising all the moments we have in this world for the good. And when Rav Sheshet would say, “Rejoice my soul! Rejoice my soul! For you have I read! For you have I studied!” – I believe that he is not speaking to his own soul, but instead, to the soul of the Torah that he lovingly learnt, reviewed, memorized, and honoured.
We learn from here that when we study (and share) Torah – and especially Torah that may be ignored, overlooked or forgotten – we bring joy and life and honour to that Torah. And as the Chafetz Chaim explains in his Sefer Torat HaBayit (Ch. 6) while referencing this story, ‘an insightful person will understand from here just how powerful [the study of just one Massechet can be, and how it serves as] a defender for such a person on high.’
Go to Top