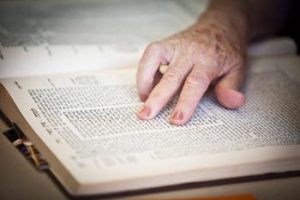 Much of today’s daf (Pesachim 7a-b) explores the various formulae used in the brachot that we recite, beginning with the question of whether the bracha recited upon searching for chametz should be לבער חמץ (to remove chametz), or על ביעור חמץ (on the removal of chametz). In fact, as the Gemara continues, it is clear that underpinning much of its subsequent discussion is the significance of a bracha either employing the prefix ל… (to….) or employing the word על… (on…).

On first glance, it would seem that there is little in terms of a fundamental difference between the two, though it could be claimed – as first suggested by Rav Soloveitchik (Harerei Kedem Vol. 2 p. 41) that a bracha employing ל…  (to…) refers to something that will occur, while a bracha employing על… (on…) may also refer to an event or action that has already occurred.

Reflecting on these remarks, and adopting the incisive ‘Brisker’ approach to interpreting the Rambam for which he and his family were renowned, Rav Soloveitchik suggests that a bracha employing ל… points to a personal duty (or what he calls גברא – a mitzvah on the person themselves), while a bracha employing על… points to an actional duty (or what he calls חפצא – a mitzvah on the object or item). Given this, it makes sense that the bracha that we recite prior to removing chametz ends with על ביעור חמץ – because it is an actional duty on the chametz.

Yet with this in mind, Rav Soloveitchik points out a fascinating curiosity, because – according to the Rambam (Tehillah 7:2) as well as general Sefardic custom – one of the three ‘Birkot HaTorah’ (Blessings of the Torah) that we recite on a daily basis concludes with the words על דברי תורה (on the words of Torah). However, as he explains, this is strange since the duty to study Torah is a personal duty, and given this, we would have expected that this bracha would have incorporated a ל…  (e.g. ללמוד דברי תורה – to study the words of Torah).

To this he offers a profound explanation that sheds much light on the endeavour of Torah study, which is that the Birkot HaTorah do not refer to the individual studying Torah, but instead, to the very חפצא של תורה – the words of Torah themselves. As he explains elsewhere, ‘we do not pronounce a blessing concerning the actual study of Torah – ‘lilmod divrei Torah’ is not mentioned. What is emphasized is the fascination which divrei Torah possess. [In terms of the bracha recited by Ashkenazim], ‘La’asok bedivrei Torah’ means to occupy ourselves, to devote ourselves, to be fascinated, and [in terms of the bracha recited by Sefardim], ‘Al divrei Torah’ means to be emotionally involved in it, not merely, ‘lilmod divrei Torah’, the intellectual act of study…The idea of passing on, of transmitting, of perpetuating divrei Torah… is not realized through an intellectual act, but through emotional involvement’ (Blessings and Thanskgiving p. 54).

This message is powerful in many ways and in many settings, but I would like to take a moment to apply it to all those studying Daf Yomi. This is because it is likely that there are days when you fully comprehend the daf, as well as days when you do not. Yet, if your day begins with the Birkot HaTorah, afterwhich you occupy yourself, devote yourself, are fascinated by, and become emotionally involved in Torah, then whatever you have or have not intellectually grasped within those words of Torah, you have undoubtedly grasped the חפצא של תורה – the words of Torah themselves.