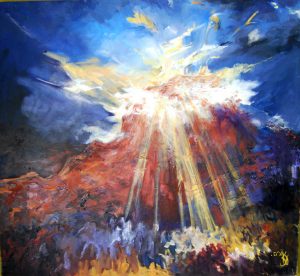 Last Shabbat we read Parshat Beshalach which concludes with the story of Bnei Yisrael’s battle with Amalek, and this Shabbat we will be reading Parshat Yitro and the story of Matan Torah. And perhaps unexpectedly, both of these relate to today’s daf (Pesachim 75b).

In terms of our daf, it’s almost exclusive focus is how the Korban Pesach must be roasted, concerning which the Torah – on two occasions (see Shemot 12:8 & 12:9) – teaches us that it needs to be done with צְלִי אֵשׁ (‘fire roasted’). But what does צְלִי אֵשׁ actually mean?

For example, among the questions posed in today’s daf are: Can the Korban Pesach be roasted but without actual fire (eg. if the fire-source has been removed from an oven)? Are coals considered as fire? How about flickering coals? And is something considered roasted if it is heated through metal rather than directly through fire? Overall, as the Gemara concludes (as summarised by the Rambam in his Hilchot Korban Pesach 8:10), צְלִי אֵשׁ means the active presence of fire – including flickering coals which are considered as fire.

And what is the relevance of today’s daf to Matan Torah? It is because we are told about Matan Torah (see Devarim 4:12) that when Hashem spoke to Bnei Yisrael, He spoke מִתּוֹךְ הָאֵשׁ (literally ‘from within the fire’) which, on the basis of our daf’s exposition of the word אֵשׁ, we can assume to mean fire with flames, as opposed to indirect heat or a cooled fire.

In a majestic essay, Rav Aharon Soloveitchik (see his ‘Logic of the Mind, Logic of the Heart’) explains that we learn from the words מִתּוֹךְ הָאֵשׁ that it is the task of Jewish parents and Jewish educators to teach Torah with warmth and passion which should, as best as we can as humans, reflect the way in which the Torah was originally given to us מִתּוֹךְ הָאֵשׁ.

Contrasting this, last Shabbat we read the story of Amalek, which the Torah (see Devarim 25:18) later explains as being the time when Amalek   קָרְךָ בַּדֶּרֶךְ – which, though translates as ‘encountered us on the way’, also means ‘cooled us (קר) on the way’.

However, the way of teaching Torah values has always been מִתּוֹךְ הָאֵשׁ, and as we learn from our daf, this requires the active presence of real warmth and real passion.

As we know, the past year has been incredibly difficult in so many ways. But having reflected on the concept of אֵשׁ in today’s daf, and as we approach Parshat Yitro, it is worthwhile reminding ourselves that while so many of us are juggling so many things, if we are privileged to be teachers – either in person or online – our task is to teach Torah מִתּוֹךְ הָאֵשׁ; and if we are parents, we should ensure that when we communicate our values to our children, we do so with warmth and passion.