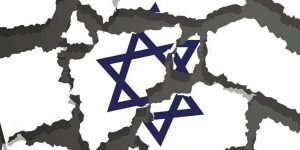 While addressing the relationship between the offering and the eating of the Korban Pesach, today’s daf (Pesachim 78b) cites a teaching of Rabbi Natan who interprets Shemot 12:6 (וְשָׁחֲטוּ אֹתוֹ כֹּל קְהַל עֲדַת יִשְׂרָאֵל בֵּין הָעַרְבָּיִם – “and the entire congregation of Israel will slaughter it in the afternoon”) to teach that ישראל יוצאין בפסח אחד – “the Jewish people can fulfil their obligation (literally, ‘goes out’) with one [Korban] Pesach”.
It should be noted that the case being described is the improbable situation where only one lamb is available for the entire Jewish people to offer a Korban Pesach. Given this, Rabbi David Sperber (1877-1962) explains (in his Shabbat HaGadol drasha as found in his Haggadah titled ‘Tehillah LeDavid’) that the statement ישראל יוצאין בפסח אחד – “the Jewish people goes out with one Pesach” can be interpreted to teach us that if the Jewish people are able to achieve the status of being אחד – as one people, as expressed in the verse (Divrei HaYamim I 17:21): וּמִי כְּעַמְּךָ יִשְׂרָאֵל גּוֹי אֶחָד בָּאָרֶץ אֲשֶׁר הָלַךְ הָאֱלֹהִים לִפְדּוֹת לוֹ עָם לָשׂוּם לְךָ שֵׁם גְּדֻלּוֹת וְנֹרָאוֹת לְגָרֵשׁ מִפְּנֵי עַמְּךָ אֲשֶׁר פָּדִיתָ מִמִּצְרַיִם גּוֹיִם – “And who is like Your people Israel, one nation in the world, whom God went to redeem for Himself [as] a people, to make You a name of great and fearful things, to drive nations from before Your people, whom You redeemed from Egypt” – and if we are able to foster a unified feeling of being like one person, then we will be worthy of further redemption.
Along these lines, R’ Yehudah Aryeh MiModena (1571–1648) observes (in his ‘HaBoneh’ commentary to the Ein Yaakov on ישראל יוצאין בפסח אחד) that whenever reference is made in the Torah to the Exodus such as “I am the Lord your God who took you out of the Land of Egypt” (Shemot 20:2; see also Shemot 23:15, Devarim 4:37), the Jewish people are referred to as a singular group (לשון יחיד), which teaches us that redemption will occur when we operate as a unified people. Moreover, as pointed out by Rabbi Moshe Tzuriel (in his Leket M’Hegyonei HaTorah on Pesachim 78b), paralleling this interpretation of Rabbi Natan about the Korban Pesach, the Gemara (Sukkot 27b) interprets Vayikra 23:42 to teach that the Jewish people have the potential of being worthy to sit in one Sukkah, and that the ultimate status of the Jewish people on the רגלים (pilgrim festivals) is that כל ישראל חברים – “all the Jewish people are friends” (Chagigah 26a).
As we know, over the past year we have all been physically separated from one another, and this is because COVID has reminded us that each of us are affected by each other whereby if one person has COVID, they can unknowingly spread it to others. Ironically, the ethic underpinning our social separation has been an appreciation of our social connection, and the love we have for one another has forced us to choose to stay separated from one another.
Naturally, COVID draws no distinctions between nations and religions. However, as a Jewish people for whom community is so important, the inability to gather to pray, celebrate or mourn together has dramatically impacted our lives, and while this past year has been expressive of love-expressed-through-separation, we certainly look forward to a time when it is safe for us to show love-expressed-through-closeness.
At the same time, while I have been so inspired by the many acts expressing love through separation and thereby showing the sense of אחד (oneness and unity) within the Jewish people and beyond, I have also been pained by the actions of some people where such love and sensitivity has not been shown, and in a period where so many have done so much to separate for the sake of their love for one another and thereby show a sense of אחד, those who have acted differently by illegally gathering have heightened national and spiritual separation through their choice to gather. By doing so, this has highlighted already existing divisions in communities that, already before COVID, needed to be reduced, not increased.
While it would be nice to turn back the clock and change the choices of the past, this is unfortunately not possible. Still, a major lesson we must learn from the past year concerns what it means to be part of the Jewish and global family, and a major question we must consider is what can be done from now on to improve a sense of אחד within the Jewish community so that we can say – with sincerity – כל ישראל חברים, “all the Jewish people are friends”.
×
×