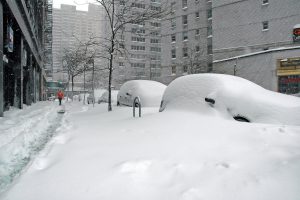 The Mishna (Pesachim 7:7) in today’s daf (Pesachim 80b) discusses various cases where a Korban Pesach was offered in the state of טומאה (impurity) but which is nevertheless considered acceptable; and included among these cases is a situation where an individual has unknowingly become טמא מת (impure through contact with the dead) from what is referred to as טומאת התהום – “the impurity of the deep”.
As the commentaries explain, טומאת התהום refers to a situation where, notwithstanding the proximity of a dead body, its presence is hidden and unknown to everyone. For example, imagine someone died outside and their body was covered with snow which fell overnight. The following morning it is possible that someone else might stand near the body yet be unaware of its presence. The question addressed by our Mishna and the subsequent Gemara (Pesachim 81b) is whether we still validate the Korban Pesach offered by a person who, in a case like this, already, unknowingly, became טמא מת – impure through contact with the dead?
As noted above, the Mishna rules that in such a case a Korban Pesach which has already been offered is considered valid, and the reason it gives is because the ציץ – the headband – of the Kohen Gadol is considered to “expiate [errors] in the sacred offerings that the Israelites consecrate” (Shemot 28:38). What this means is that though the Korban Pesach was offered in a state of impurity and therefore should be invalid, divine appeasement is shown in this situation since the person truly could not have known that they were טמא מת.
Translating the concept of טומאת התהום (the impurity of the deep) beyond the world of טומאת מת (impurity of the dead), it can occasionally occur that we make important life decisions after much research and due diligence, and only afterwards find out that things were not as we thought they were.
Of course, if we were deceived of misled, then we should revert back to those who deceived or misled us. However, there are other times when we thought a situation was good or safe, and neither we or anyone else had any idea that there was something more unsettling or even more sinister lurking in the background.
When this occurs, we often get very angry with ourselves while saying how ‘we should have known’ or ‘we should have checked’ that this was so. Yet what we learn from the law of the טומאת התהום is that situations can arise where we cannot be expected to have known what lurks in the background. And when this occurs, just as God shows appeasement to us, we should show appeasement to ourselves and recognize that even in a world where we think that nothing is hidden from the eye, sometimes we can unfortunately stumble upon טומאת התהום.
×
×