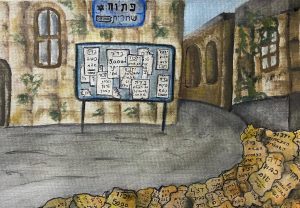 As previously explained in yesterday’s daf, טומאת התהום (literally “the impurity of the deep”) refers to a situation where, notwithstanding the proximity of a dead body, its presence is hidden and unknown to everyone.
In today’s daf (Pesachim 81b), a biblical source is sought for the law of טומאת התהום, to which Rabbi Elazar responds that when the Torah – within the context of the laws of the Nazir – speaks of a situation where the Nazir is in contact with the dead, it states: וְכִי יָמוּת מֵת עָלָיו – “And if any person shall [unexpectedly] die beside him” (Bemidbar 6:9). As he explains, the very fact that the term “beside him” is used by the Torah comes to teach us that this describes a situation when the Nazir is aware of the presence of death in their close proximity – which therefore comes to exclude a case of טומאת התהום when they are not aware.
According to this explanation, the general assumption is that when death חס ושלום occurs near us, ie. amongst our family, friends or in our wider community – we should be aware of this fact.
Of course, death is, and has always been, part of the ebb and flow of life. However, over this past very difficult year where there have been so many deaths, and given the ease and speed with which information can be shared via technology, there have been days when death notifications have been non-stop, and unlike the case of the טומאת התהום which refers to a lack of awareness of death around us, there have been days when it has been hard to cope with the over-awareness of death around us.
When this has occurred, I have referred to a powerful insight offered by Rabbi David Orlofsky (as shared by Rabbi Paysach Krohn in ‘The Maggid at the Podium’ pp. 169-170) concerning Rabbi Akiva:
“Rabbi Akiva had 12,000 pairs of talmidim, 24,000 students. They extended from Akko in the north all the way down to a town called Antiflus in the south. They all died during a 33-day period between Pesach and Shavuos. If you divide 24,000 by 33, you get an average of 700 talmidim dying every day! Can you imagine! Someone would run to Rabbi Akiva and say, “A young talmid chacham in Yerushalayim, who just got married, died! Come eulogize him.” The next day they called him to come up to Akko, where a young talmid, a father of young children, had died. The next day they called him down to Ashkelon, where a young genius, an only child, had passed away. Rabbi Akiva had to hear this 700 times every day. Can you imagine the toll it takes on a person to run up and down Eretz Yisrael for 33 days, saying eulogies, comforting mourners, trying to give chizuk etc.? What would most people do? They would say, “Ribono shel Olam, You obviously don’t like the Torah that I’m teaching. I’ll forget about it. I’ll stop teaching Torah.” However, that is not what Rabbi Akiva did. He did not allow himself to be broken. He started all over again. The Midrash says that he found seven new talmidim. It is from these talmidim that Rabbi Akiva started over again and from whom we have the legacy of Torah. A Jew can never be broken, no matter what the situation is. No matter what has happened in our lives until now – no matter what devastation, desolation, or destruction we have been through – we can always start anew. It is never too late.”
All this is true and very important to remember given the current global situation. However, there is a further lesson we can learn from Rabbi Akiva, because while he had taught his students that ‘love your neighbour like yourself’ (Vayikra 19:18) was the great rule of the Torah (see Rashi there, quoting Torat Kohanim), it seems that his students – whom we are told lacked respect for one another (see Yevamot 62b) – did not fully heed his message.
So what did Rabbi Akiva do? Not only did he start anew with new students, but he also started anew by rethinking how to teach the central Torah ideas which his prior students had tragically ignored. He channeled his deep aching about loss of life to teach more students, and more effectively, about the sanctity of life (see for example Avot 3:18).
Sadly, there have been too many deaths over the past year ‘beside’ each of us. True, some weren’t preventable, but some were. Which is why the time has come to rethink how we learn, how we teach, and in particular, how we live according to central Torah ideas such as the sanctity of human life.
(nb. the accompanying image – capturing so much of what I have sought to explain – was painted by
Shira Silkoff
)
×
×