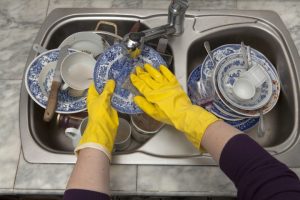 The most significant thesis of the author of the Sefer HaChinuch, which he repeatedly promotes in that magnificent work, is אדם נפעל כפי פעולותיו – a person is ‘acted upon’ according to their actions, and that אחרי הפעולות נמשכים הלבבות – our heart follows the actions that we do. What this means is that rather than viewing our actions as expressions of our thoughts and feelings, our actions can help us mould our thoughts and feelings. For example, as the Rambam explains (see his commentary to Avot 3:15), the more you perform the act of giving charity, the more it fosters the spirit of generosity within.
I mention this because the first occasion where this principle of “a person is ‘acted upon’ according to their actions” is referenced in the Sefer HaChinuch is with reference to the Torah prohibition of breaking the bones of the Korban Pesach (see Shemot 12:46) where we are taught that when preparing and eating from the Korban Pesach, we must not break its bones. As the Sefer HaChinuch explains, by showing this restraint and by eating in a dignified way as our ancestors did in Egypt, this can help us mould our thoughts and feelings about what it means to be part of a dignified and holy people.
In today’s daf (Pesachim 83a), the question is asked whether this prohibition of breaking the bones of the Korban Pesach also applies to invalid Korban, and though a later Mishna (Pesachim 7:11) states that this may be done, today’s daf quotes the opinion of Rabbi Yaakov who says that this is only true if such a Korban was always invalid, whereas if it was once valid and was later invalidated, the prohibition remains. Significantly, this is the halacha as codified by the Rambam (Hilchot Korban Pesach 10:6), meaning that the bones of a once valid and now invalid Korban Pesach may still not be broken.
But why? If the meat is no longer considered valid, and if it is not going to be consumed as Korban Pesach meat, why do we care whether the bones are broken or not? As Rabbi Elchanan Poupko explains in his wonderful commentary on the Sefer HaChinuch called ‘Chochmat Chinuch’, we learn from here – and from the subsequent discussion about this law in tomorrow’s daf – that the prohibition of breaking the bones of the Korban Pesach is not rooted in it being a Korban per se. Instead, as explained by the Sefer HaChinuch, it is rooted in the expected behaviour of those who wish to bring and consume a Korban Pesach – which is why this prohibition even applies to the bones of a once valid, and now invalid, Korban Pesach.
Returning back to the concept that “a person is ‘acted upon’ according to their actions”, we learn from here that the very act of doing something can foster deeper thoughts and feelings, and it is in this spirit that I would like to share what I think is my favourite of all the stories ever told by Rabbi Sacks zt’l (as found in ‘The Home We Build Together’ pp. 173-174) which has far-reaching implications for global leaders, and each and every one of us:
“The most brilliant act of creative diplomacy I encountered was undertaken by the late Lord (Victor) Mishcon. He cared passionately about peace in the Middle East, and in the early 1980s he realized he had the chance to do something about it. He knew the then ruler of Jordan, King Hussein. Their children had gone to the same school and the families had become friends. He also knew the Israeli Foreign Minister, Shimon Peres, because he was his lawyer.
He decided to bring the two of them together. He invited both to dinner at his apartment. The evening proceeded agreeably until the two got up to leave. They thanked their host for his hospitality. Mishcon put on an air of surprise. ‘You can’t leave yet,’ he said. ‘What about the washing up?’. ‘Are you serious?’ they said. ‘Absolutely,’ Mishcon replied. And so the two men removed their jackets, rolled up their shirtsleeves, went into the kitchen and did the washing up.
People bond when they do something together. So, the king of Jordan washing, the Israeli foreign minister drying, a friendship was struck between the two. The result would have been a peace treaty between Israel and Jordan had it not been overruled by the then Prime Minister of Israel. But the treaty did eventually happen, in 1994, and in 1995 Mishcon was awarded the Star of Jordan by King Hussein. Sometimes side-by-side – working together – is more effective than face-to-face – talking together.”
This story can be used to teach us many things, but undoubtedly among the precious lessons we can learn from here is that “a person is ‘acted upon’ according to their actions”, and “our heart follows the actions that we do”.
×
×