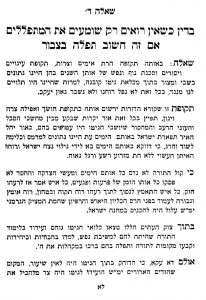 In response to the Mishna’s discussion found in today’s daf (Pesachim 85b) about the boundaries of Jerusalem within which the Korban Pesach may be eaten, which mentions how a doorway is considered to be a boundary, the subsequent Gemara begins with a statement of Rabbi Yehuda quoting Rav that, ‘so too is the law concerning prayer’ – meaning that Rav was of the opinion that someone standing outside the doorway cannot be included with those praying inside.

However, the Gemara then informs us of the opinion of Rabbi Yehoshua Ben Levi who poetically stated how: אפילו מחיצה של ברזל – even a separation made of iron, אינה מפסקת בין ישראל לאביהם שבשמים – is not a barrier between the Jewish people and their Father in Heaven, and thus, someone standing outside a doorway can be included with those praying inside.

This position of Rabbi Yehoshua Ben Levi has been referenced many times over the centuries, and it has been regularly quoted in recently penned responsa dealing with less-than-usual prayer arrangements where minyanim have attempted to find ways to pray together in a safe and also halachically acceptable manner. However, I would like to reference a slightly less recent citation of this statement from an even more terrifying time. But to do so, a little background is necessary.

Rabbi Ephraim Oshry (1914–2003) was a notable halachist who, during the period of 1941-1943, was among the 29,000 Jews who lived in the Kovno Ghetto. During this period, he was asked thousands of halachic queries by men and women in the ghetto which he recorded with his answers on scraps of paper and which he then hid in tin cans. After the liberation of Kovno, Rabbi Oshry retrieved these notes and subsequently published expanded versions of his answers in his 5-volume set of responsa called ‘She’elot U’Teshuvot Mima’amakim’ (nb. an English volume with summaries of some of the answers he penned was later published under the title ‘Responsa from the Holocaust’).

In Volume 4 Question 4 of ‘She’elot U’Teshuvot Mima’amakim’, Rabbi Oshry describes how, notwithstanding the immense fear in the ghetto, לא נפל רוחנו – ‘our spirit did not fall’, and he then refers to a group of young men, the ‘Tifferet Bachurim’, who he taught and who were able to adapt a room in an empty building in the ghetto to be a small place for study and prayer. However, because this location was near the ghetto gate where the Germans would grab young men for forced labour, they also created a secret room behind the Aron Kodesh such that, if they heard the German soldiers running around to find young men to work, these younger men could hide in this secret room while the elderly – who also came to study and pray but who the German’s would not take for forced labour – would remain.

In light of this situation, one of the boys asked Rabbi Oshry whether, while they were hiding in this secret room while prayers were being said by the elderly and weaker men in the ‘main’ area for study and prayer, they were considered to be part of the minyan.

The short answer is that Rabbi Oshry responds that they do, and in his response, he quotes the Mishna Brura (Orach Chaim 55 note 60) who references Rabbi Yehoshua Ben Levi’s teaching that, ‘even a separation made of iron is not a barrier between the Jewish people and their Father in Heaven’.

Yet it was his opening line that moved me to tears, because – as Rabbi Oshry explains – ‘from this very question that the young ‘Tifferet Bachurim’ asked, we can see how much the Torah and Mitzvot illuminated the heart of the darkness of ghetto during this fearful time, and how strong the Yirat Shamayim (Fear of Heaven) was in their hearts…to fulfil the mitzvot according to the halacha notwithstanding the incredibly difficult circumstances’.