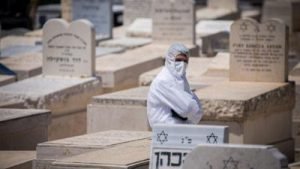 Today’s daf (Pesachim 91) begins and ends with Mishnayot (Pesachim 8:6, 8) which each start by referring to an אונן (Onen) who, as Rashi explains with reference to Zevachim 100b, is someone whose close relative has died but has not yet been buried.
And what is the relevance to the status of an אונן to our Massechet? It is that among the prohibited things that an אונן may not do is – according to Torah law – eat sacrificial meat during the daytime when their relative has died (see Vayikra 10:19) and – according to Rabbinic law – is prohibited from performing positive mitzvot or from consuming any meat or wine (see Berachot 17b).
Given this, the question addressed in the Mishna concerns the possibility of an אונן being counted among, and participating in, the consumption of the Korban Pesach. In response, we are told that given the importance of this mitzvah, and since the prohibition of consuming sacrificial meat on the night after a relative has died is rabbinic, this prohibition is overruled by the positive commandment of partaking in the Korban Pesach. What this means is that notwithstanding the status of אונן, there are rare circumstances when what is seemingly prohibited for an אונן is, in fact, permitted.
Today, the question of Korban Pesach sadly remains theoretical. However, what I would like to consider is whether the rules of an אונן – whose close relative has died but has not yet been buried – still fully applies in the modern age.
Before proceeding, we must consider why an אונן is not permitted to perform positive mitzvot or to consume any meat or wine? Concerning this question, we find two different approaches in the Gemara (Yerushalmi Brachot 3:1). According to one explanation, the reason why an אונן is freed from these obligations and is limited by what they consume is out of respect of their dead ‘who is lying in front of them’, while according to another explanation, this is because they need to be available to deal with the burial arrangements of their relative. Significantly, as we are taught elsewhere (see Semachot 2:10), if – God forbid – a relative has died but their body cannot be retrieved for burial, then the laws of אנינות do not apply and their relatives begin the period of אבלות (mourning) immediately.
Today, when the Chevra Kaddisha generally collects a body soon after death and deals with most of the burial arrangements, there are those – such as Rabbi Avraham Danzig (see Chochmat Adam 153:3) – who rule that once this occurs, their relatives cease having the status of אונן and they begin their status of אבל, meaning that they are obligated in positive mitzvot and they may eat meat and drink wine. However, many other authorities disagree, and thus Rabbi David Brofsky explains that, ‘it is customary [that]… one observes aninut until after the burial, as the mourner is often still involved in arrangements for the funeral’ (Hilkhot Avelut p. 43).
Of course, all this presumes that some aspects of the funeral remain within the purview of the relatives. However, this has not always been the case – especially in the past year. Accordingly, Rabbi Professor Avraham Steinberg has ruled in his recently published book of Jewish Law addressing various halachic issues relating to the Coronavirus pandemic that, ‘in places where there are many deaths at once, and they cannot all be buried for many days or even weeks, and when they die it is unknown when the funeral will take place, the relatives begin the mourning period immediately after the body is given over to the mortuary… even though the deceased has not yet been buried’ (The Coronavirus Pandemic: Historical, Medical and Halachic Perspectives p. 74).
Sadly, I know many people who have lost relatives over the past year, and beyond their immense feeling of personal loss, many of them have unfortunately not had the ‘benefit’ of burying their relative, or of receiving comforters, in a manner that – until this year – was the norm. Ultimately, not only have their grieved for their loss, but they are still grieving for the fact that they’ve yet to fully grieve.
To them, and to all those who have lost friends and relatives over the past year, I hope you find (a small measure of) comfort in the knowledge that I am thinking of you.
×
×