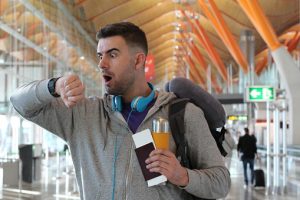 The Torah informs us that “if any person is ritually impure from contact with the dead” אוֹ בְדֶרֶךְ רְחֹקָה – “or is on a distant journey”, “then they shall still have the opportunity to prepare God’s Passover offering… [on Pesach Sheni, occurring a month later] on the afternoon of the 14th of the second month (i.e. the 14th of Iyar)” (Bemidbar 9:10-11).
In light of this rule, the following question is posed in today’s daf (Pesachim 92b): If someone was on a distant road such that they were not able to reach Yerushalayim for the slaughtering and the sprinkling of blood of the Korban Pesach, but was able to arrive in time to consume it, are they still considered valid participants of the Korban Pesach, or must they observe Pesach Sheni a month later?
According to Rav Nachman, notwithstanding their absence for the preparatory elements of the Korban Pesach, such a person is considered to be part of the group participating in the Korban Pesach and therefore fulfils their duty on Pesach and need not observe Pesach Sheni. Contrasting this view, Rav Sheshet rules that such a person is not considered to have been part of the original Korban Pesach and must thereby observe Pesach Sheni a month later.
As the Gemara proceeds to explain, this is because Rav Nachman views the concept of Pesach Sheni as a ‘second chance’ whereas, if someone could somehow make it in time to participate in the original Korban Pesach, תבוא עליו ברכה – “may blessing come upon them”.
Contrasting this, Rav Sheshet equates an individual who was on a distant journey with someone who is ritually impure- such that he considers both as being disqualified from the first Pesach.
Interestingly, while the position of Rav Nachman may be more inclusive, the Rambam (Hilchot Korban Pesach 5:3) actually rules in accordance with Rav Sheshet, and thus someone who is still far away while the slaughtering and the sprinkling of blood of the Korban Pesach is taking place must observe Pesach Sheni.
What we learn from here is that while life can often be unpredictable, it is important to do our utmost to arrive on time for the things that count, and while failing to do so may not necessarily be our fault, just like most theatres and classical concerts do not allow audiences to enter once the performance has begun, our sincere desire may not be a sufficient justification to grant our participation in an event that we have joined half way through.
×
×