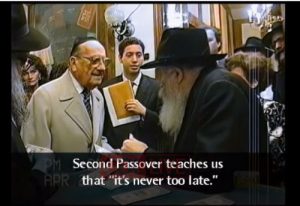 We are taught in a Beraita in today’s daf (Pesachim 93a) that someone who converted to Judaism between Pesach and Pesach Sheni, or someone who has become a halachically-defined adult (12 for girls, 13 for boys) between Pesach and Pesach Sheni is, according to Rebbi, obligated to bring a Korban Pesach on Pesach Sheni.
As the Gemara then explains, this rule – which was later codified by the Rambam (Hilchot Pesach 5:7) – is seemingly because Rebbi considers Pesach Sheni to be a רגל בפני עצמו – ‘a festival in its own right’.
However, at least on first glance, this statement by the Gemara presents a problem with our general understanding of Pesach Sheni. As Rabbi Menachem Mendel Schneerson (the 7th Lubavitcher Rebbe) points out (see Likutei Sichot Beha’alotecha 4), an idea found in chassidut which was specifically taught by his father-in-law Rabbi Yosef Yitzchak Schneersohn (the 6th Lubavitcher Rebbe) is that the very essence of ‘Pesach Sheni teaches us that no opportunity is spiritually lost; anything can be fixed’ (see Hayom Yom p. 53).
But if Pesach Sheni is ‘a festival in its own right’ – whereby even those who were not obligated to observe Pesach (eg. a convert or someone who has become a halachically-defined adult between Pesach and Pesach Sheni) are obligated to observe Pesach Sheni – then how can it be described as a festival whose ‘essence’ teaches us that no opportunity is spiritually lost?
To this, Rabbi M.M. Schneerson offers a fascinating resolution. As he explains, according to the detractors of Rebbi, Pesach Sheni is spiritual compensation for Pesach whereby, while the Korban Pesach should really have been offered on the 14th of Nissan, a compensatory Korban is offered a month later. Still, according to this rationale, those bringing the Korban Pesach on Pesach Sheni are really acting in the present to compensate for the past.
Contrasting this, according to the rationale of Rebbi that Pesach Sheni is a רגל בפני עצמו, ‘a festival in its own right’, then Pesach Sheni provides an opportunity to live in the present without having to think about the past. Rather than being a remnant of something that occurred in the past, Pesach Sheni is a full opportunity to be harnessed in the present.
Ultimately, there are two ways of maximizing opportunities that we previously didn’t have. One is to do things now while regretting the past, while the other is to do things now while living in the present. And as Rabbi M.M. Schneerson teaches us, by understanding Pesach Sheni as ‘a festival in its own right’, we come to learn that by living in the present, we ultimately never lose any opportunity.
×
×