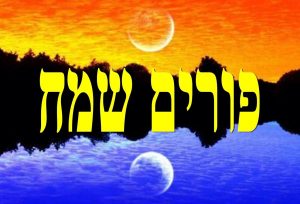 Today’s daf (Pesachim 97a) addresses the laws pertaining to a lost Korban (sacrifice), and it is here where we are taught Rava’s rule that אבידת לילה לאו שמה אבידה – [a sacrifice that has been] “lost at night is not considered lost”.
Reflecting on this message as we celebrate Purim today, it is noteworthy that much of the Purim story occurred at night. Moreover, as numerous commentaries explain, the hidden miracles of Purim are comparable to the hiddenness associated with night (see the Maharal’s introduction to his ‘Or Chadash’ commentary to Megillat Esther), with the conclusion of the Purim story being comparable to the morning when so much of what had been hidden during the night was then revealed (see Yoma 29a). In fact, this is one of the reasons why the Megillah is read both at night and in the morning – to refer both to the hiddenness of the story, and to the eventual revelation expressed by the end of the story.
Given this, there is a profound connection between the Purim story and the words of Rava that אבידת לילה לאו שמה אבידה – something that has been “lost at night is not considered lost”, because what we learn from the Purim story is that even when things seem look lost in times that are comparable to night, all is not truly lost.
×
×