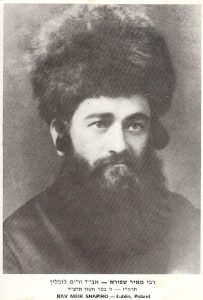 Yesterday, the 7th of Cheshvan, was the 88th yartzheit of Rav Meir Shapiro (1887-1933) who is regarded by many as being the founder of the Daf Yomi movement. A Hasidic rabbi with a truly brilliant mind, Rabbi Shapiro was a high achiever who, already from a young age, had a reputation for Torah greatness. Over time he took on leadership positions and opened numerous yeshivot – most notably Yeshivat Chachmei Lublin, and he became a political ambassador for the Jewish community – all of which is particularly impressive given that he was unwell for much of his short life. Yet it was actually his weak heart, caused by rheumatic fever which he contracted as a child, that made sure that Rabbi Shapiro was constantly aware of his mortality and which drove him to maximise every opportunity, and every day, that he had in his life.

In 1923, Rabbi Shapiro attended the first Knessia Gedola, and it was there when he submitted his proposal of Daf Yomi. At that time the Jewish world was under considerable duress, and just like Rabbi Yehuda HaNassi almost 2000 years beforehand, Rabbi Shapiro was worried that Torah would be forgotten. Given this, he proposed the establishment of Daf Yomi – the daily study of a page of Talmud – with the endeavour that all participants complete all 2711 pages over a 7.5 year period. And why did he particularly choose the model of Daf Yomi as a means to promote and protect Torah study? Rabbi Shapiro had 3 reasons:

Firstly, in his speech to the members of the Knessia Gedola, Rabbi Shapiro made reference to Gemara Shabbat 31a where Rava lists the six questions that each of us will be asked when we arrive in heaven including ‘Did you designate times for Torah study?’ – and he wanted every Jew to be able to respond affirmatively to this question. Second, he also observed that only some Massechtot were being studied in yeshivot. As he said, “until the present time, there are many tractates that people do not study, tractates that are ‘orphans’ which only exceptional people concern themselves with. Now the daf will rectify the situation.” And finally, his vision was that Daf Yomi would be a force of unifying the Jewish people – and to communicate this idea, he asked those present to imagine the following: “How great it is! A Jew travels by boat and takes a tractate of Berachot in his arm. He travels for 15 days from Eretz Yisrael to America, and each day towards evening he opens the Gemara and studies the daf. When he arrives in America, he enters a Beit Midrash in New York and finds Jews studying the very same page that he studied that day, which allows him to happily join their study group. He discusses matters with them and they answer his questions, and the Name of Heaven is glorified and sanctified! Another Jew leaves the United States and travels to Brazil. He returns to the Beit Midrash and finds people immersed in the very page that he studied that day. Can there be a greater unity of hearts than this?!”. When he put this proposal to the plenum it was enthusiastically received and applauded.

Significantly, as Rabbi Dr. Chaim Simons explains in a fascinating article on the subject (see https://bit.ly/3iYlpsN), Rabbi Shapiro did not – in fact – conceive of the idea of the Daf Yomi. Two years previously, this same proposal was promoted by Rabbi Moshe Menachem Spivak, and apparently, ten years before this, the idea was suggested by Rabbi Yechezkel Fraser. In fact, Rabbi Simons goes so far as to suggest that the concept of a Daf Yomi may even have its origins in the late 18th century. Nevertheless, there is a Talmudic principle (eg. Brachot 12a) that הכל הולך אחר החיתום – ‘everything is determined by the conclusion’, and at the end of the day, it was Rabbi Shapiro who brought the vision of Daf Yomi into reality.

Yet while all this is very interesting, the question you may be asking yourself is what does it have to do with today’s daf (Rosh Hashanah 5a)? To answer, I would like to reflect on the fact that, since starting to write my daily daf yomi thought at the beginning of this current daf yomi cycle, I’ve written around 650 separate daf yomi pieces. Yet had you asked me – even just a few weeks before starting this endeavour – whether I could write something each day on daf yomi for just a single month, I would have quickly and simply laughed at the proposition. So how did this come to be?

In today’s daf we are taught about the Jewish calendar that: מנה ימים – ‘count days’, וקדש חודש – ‘and sanctify a month’, and what this means is that a Jewish month is counted according to days and not hours. However, it can also be understood to be teaching us that when we focus on what we need to do to live and grow for a single day and we make that day count, and we then do the same the following day, then days can become months – and months can become years.

Undoubtedly, this value for every day and for making every day count – which stemmed from Rabbi Shapiro’s drive to maximise every opportunity and every day that he had in his life – was what motivated him to establish Daf Yomi, and in many ways, this message of מנה ימים וקדש חודש – ‘count days and sanctify a month’ is how I’ve been able to continue to learn and write something each day on daf yomi – even though I couldn’t have imagined doing so, prior to doing so.

Thus what we learn from Rav Shapiro, as expressed in the global daf yomi movement, is the message of beginning every journey with a single step, and how much can be achieved if we are מנה ימים – we make each day count.