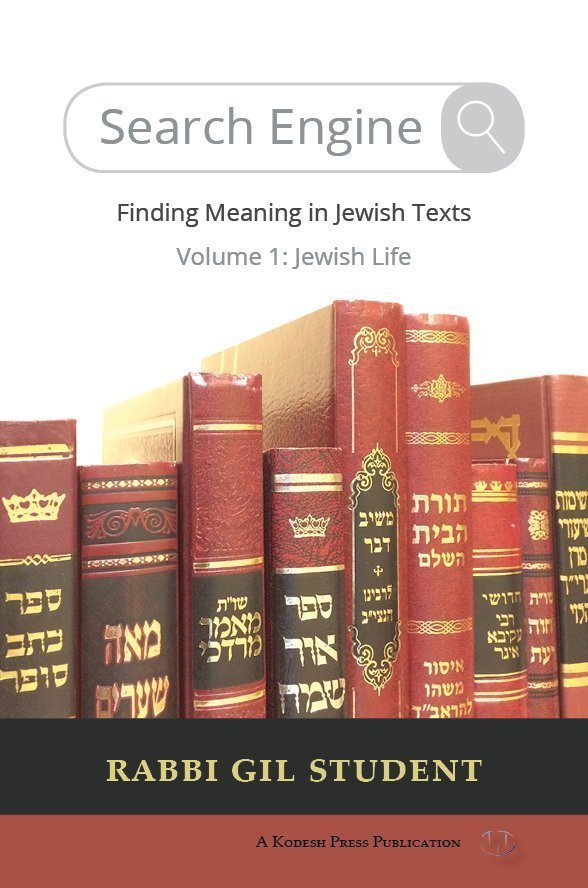 Imagine you asked me for a book recommendation – specifically, a book that discussed Jewish law, but somehow not just Jewish law. A book that addressed technological developments and social trends through the halachic lens, while also teaching about the halachic process. A book that was informative, yet not dogmatic; open-minded, yet an authentic expression of Torah laws (halachot) and outlook (hashkafot). A book that could be read and enjoyed by those with limited Jewish knowledge, yet one that would also be an asset to those with an extensive Jewish knowledge. And finally, a book that engages the reader, while being easy to pick up and put down. Until this year, I would have struggled to provide an answer. However, this was before I received a copy of Rabbi Gil Student’s ‘Search English – Finding Meaning in Jewish Texts, Vol. 1: Jewish Life’.

For those who are familiar with the Jewish blogosphere, Rabbi Gil Student is one of the most industrious, insightful and influential writers of Jewish content, and specifically nuanced halacha and hashkafa. In 2004 he started his Hirhurim blog, and in 2013 this expanded into his online periodical called Torah Musings.

As Rabbi Student explains in his Introduction of Search Engine Vol. 1, the internet age hasn’t just revolutionised how we access information, but also our expectations of the format of the information. Our limited focus means that authors need to write in a compelling manner that grabs our attention quicker, while providing us with information in short bite-size chunks.

Having adopted this approach, Rabbi Student has written thousands of pieces, and in Search Engine Vol. 1 the reader is treated to over 90 short essays addressing a vast range of topics, each lasting 3-4 pages, which were first featured on Torah Musings. For example, there are essays on taking non-essential medicine on Shabbat, electric sensors on Shabbat, is the Yom Ha’atzmaut liturgy for everyone, the use of deodorant on Tisha B’Av, the propriety of bypassing the mitzvah of honouring a Kohen, turning a Church into a shul, the use of the phrase Bli Neder, Surviving self-endangerment, and gun ownership in Jewish law. Additionally, some essays focus less on practical halacha and more on contemporary halachic writing and discourse such as his essay on Hilchot Shabbat handbooks, or his review of Rabbi Dr. Sharon Shalom’s book exploring Ethiopian Jewish Law.

To give you a flavor of Rabbi Students scholarship and skills, I shall discuss two of the above-mentioned chapters:

Rabbi Student begins this essay by referring to some recent articles on the subject and by acknowledging that ‘as the world becomes more automated, as video cameras become ubiquitous and energy conserving censors become commonplace, the ability to even minimally function on Shabbos demands closer consideration of the halakhic viability of this technology.’

He then offers a more detailed analysis of the above-mentioned articles, firstly by explaining a fascinating debate between Rav Elyashiv Knohl and Rabbi Yisrael Rosen whether triggering an electronic sensor to open an automatic can be viewed as an indirect act (gerama) which, according to halacha, is permissible in a situation of need. Rabbi Student then mentions a more recent contribution to the conversation by Rav Dror Fixler and Rav Eli Reif who claim that ‘if you are walking on your way… and trigger a sensor, even if you want to trigger it, you are not liable for the result’. This is because they believe like their teacher Rabbi Nachum Rabinovitch that ‘essentially, the person does not act on the sensor but the sensor acts on the person’.

Significantly, the above-mentioned Rabbi Yisrael Rosen, though agreeing in theory with much of the argumentation of Rabbi Rabinovitch et al, disagrees in practice because ‘when an electronic sensor is the normal way to perform a forbidden action, it becomes a human tool. The exact technology of the sensor is irrelevant. We have to look at the results. If a person’s actions trigger an electronic reaction then it is as if the person flipped a switch.’ This too was the view of Rabbi Eitam Henkin who explained how ‘normative Ashkenazic practice does not allow a regular pesik reisheih that provides a benefit, even if only rabbinically forbidden.’

Ultimately, what Rabbi Student achieves in this short essay is summarise one of the most important and fascinating halachic debates of our generation while providing sufficient information for the expert to delve further into the subject, and sufficient clarity for the non-expert to engage in the conversation.

As above, Rabbi Student begins his essay by clearly framing the topic at hand: ‘Life consists of risk-taking in big and small ways. Those who are completely risk-averse never leave their homes out of fear. We consciously rate the risks involved in various activities and judge whether we want to accept those risks. Some people are even willing to take risks that are universally recognized as serious life threats, with substantial possibility of death. At times, doing so is even a mitzvah. Should we thank God if we survive those risks?… Do we say the [hagomel] blessing if we emerge from a life-threat we willingly accepted?’

He continues by citing a debate by Rav Yosef Azulai (the father of the Chida) who rules that the blessing was only enacted for someone who survived an external life threat and not something willingly undertaken, and Rav Eliezer Nachum (author of Chazon Nachum) who states that the blessing applies to anyone who survives. As Rabbi Student observes, ‘this debate has many practical implications’, and he then proceeds to list three examples as provided by Rav Eliezer Melamed: Elective Surgery, Suicide Attempt and Release From Prison.

Each of these naturally differ from the other, but in terms of the second category Rabbi Student writes that ‘someone who is rescued from a suicide attempt has been saved from a life-threatening situation. However, he was the threat! Does he still bentch Gomel? Rav Chaim Palaggi (Responsa Lev Chaim 3:53) rules that he should recite the blessing because he was saved, as does Rav Azriel Hildesheimer (Responsa Rav Azriel, vol. 1 no. 29). However, Rav Ovadiah Yosef (Yechaveh Da’as 4:14) disagrees. Even though he generally rules that you should bentch Gomel when saved from self-imposed danger, he considers a suicide attempt different. Attempting suicide is a sin. How can someone recite a blessing generated by the sin?’

Here too we encounter a fascinating debate which stirs up many questions about the choices we take and the blessings we make.

In his Introduction to Search Engine Vol. 1, Rabbi Student writes that ‘in Judaism, law is applied theology’, meaning that through the study of contemporary halacha we can learn not only how to live halachically in the modern world, but also learn how to approach the challenges of the modern world.