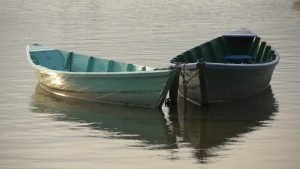 Much of today’s daf (Shabbat 101b) discusses the case mentioned in the Mishna (Shabbat 11:5, 100b) involving two boats that are tied together thereby enabling carrying from one to the other.

Here, each boat is a ‘reshut hayachid’ (private domain) and the water on which the boats are floating is a karmelit (open area). Consequently, by tying the boats together an ‘eruv’ is created thereby enabling carrying from one boat to the other. The question considered by our Gemara is how strong must this bond be to create the eruv between them?

According to Shmuel, ‘even if they (i.e. the boats) were tied with the string of a cloak’ it would be sufficient. However, as the Gemara points out, if this type of string is sufficiently strong to hold two boats together then surely it is obvious that it may be used for this purpose!

It answers by informing us that Shmuel ruled elsewhere (Mishna Ohalot 8:5) that if an iron chain connects a boat to a building that is housing a corpse, then the boat itself contracts the ‘tumah’ (negative spiritual energy) of the corpse. Thus, by specifying here that boats may be tied together with the string of a cloak, Shmuel sought to distinguish between the type of bond that spiritually connects a boat to ‘tumah’ (i.e. an iron-chain), and the type of bond that can physically connect two boats and thereby create an ‘eruv’ for Shabbat (i.e. the string of a cloak). Based on this we learn that when dealing with death and with ‘tumat met’ (negative spiritual energy of a corpse), the strongest of materials (i.e. metal) are needed to create a spiritual connection, while when dealing with Shabbat and enabling living beings to carry from one area to another, even a thin material with limited strength is effective.

However, notwithstanding the clarity of this law, all too often we confuse the two. For example, has it ever occurred to you that, upon hearing about someone in your neighbourhood who is in need of assistance, you have said to yourself ‘since I don’t really know them (i.e. since my bond with them is ‘thin’ and ‘of limited strength’) I don’t want to get involved’, while when hearing about the death of someone you barely knew, you felt the need to attend the levaya (funeral) or shiva as if your bond with them was as strong as an iron-chain?

Given this possibility, what we learn from Mishna Shabbat and from Shmuel’s ruling is that two boats – which for our purpose represents two different people – can create a shared space enabling the giving from one to the other even on the basis of something as thin and with as limited strength as the string of a cloak.