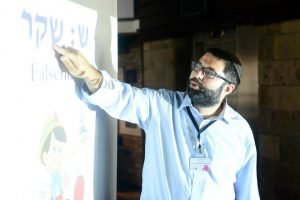 Today’s daf (Shabbat 104a) contains some of the most exquisite Torah insights that can be found throughout the Gemara – insights that are both incredibly simple, yet also incredibly profound.
Having previously been discussing the laws of writing on Shabbat and the different shapes of the hebrew letters, the Gemara relates how a group of students had come to the Beit Midrash (study house) that day and shared insights ‘the likes of which were not stated even in the days of Yehoshua Bin Nun’. But what does this mean? What is the significance of saying that these ideas were comparable to those shared during the time of Yehoshua?
As we know, there were many great teacher-disciple relationships in Jewish history. However, as emphasised by the Torah, Midrash and Talmud, the quintessential teacher-disciple relationship was that of Moshe and Yehoshua. However, this relationship was also unique inasmuch of the fact that Moshe did not lack knowledge or understanding of any aspect of the Torah. Consequently, rather than attempting to add to the Torah that he received, Yehoshua’s task as Moshe’s disciple was not to add to the traditions, but rather, to find meaning in the existing traditions that were passed down to him.
Returning to our Gemara it seems that this group of students had been studying the shapes and order of the alef-bet, and while doing so they had noticed that embedded within the seemingly arbitrary series of hebrew letters was a collection of profound teachings about Jewish values.
For example, from the juxtaposition of the letter א (representing the first letter), and ב (representing the concept of בינה – understanding), these students identified that the first priority of a Jew is to pursue understanding as found in the Torah, while from the juxtaposition of the letter ג (representing the word גומל – meaning ‘to help’) and ד (representing the word דלים – meaning ‘the poor’), they understood that a core value in Judaism is to help the poor etc. What this means is that simply by knowing the hebrew alef-bet, a Jew can know and review a broad range of Jewish values, and having discovered these teachings, these students shared what they had learnt in the Beit Midrash that day.
However, my connection to this Gemara goes beyond mere appreciation, and five years ago I decided to share these same ideas with a very special group of people.
To give some context, I had become friends with a magnificent Jewish educator called Maxim Delchev who lives in Sofia (Bulgaria), and in 2015 Maxim invited me to Bulgaria to deliver a number of sessions a community family retreat.
Given that the majority of those present had a very limited amount of Jewish knowledge, my task was to teach profound Jewish values while sharing some basic Jewish knowledge – and this is why I decided to use this opportunity to teach the insights found in this daf of Gemara.
We began by reviewing the alef-bet and we then proceeded to study each of the ideas found on our daf starting with alef-bina, and moving onto gomel-dalim etc., and what was so incredibly special was seeing the eyes of all those learning who – like the students mentioned in the Gemara and like Yehoshua himself – were finding, discovering and learning meaning in the traditions – here, the alef-bet – that they were mostly all familiar with.
I often think back to that class and of the importance of sharing ideas that are incredibly simple yet also incredibly profound. Sadly, in many communities and in many centres of Jewish learning around the world, we have overcomplicated our approach to Torah study. As Rabbi Dr. Norman Lamm once explained while exploring the personality of the ‘tam’ (simple son) of the Haggadah (see https://bit.ly/2BfaSqf), ‘our society in general suffers from an overabundance of knowledge at the expense of man’s wholeness, his self, his integrity… Let us not forget that it was Solomon, the wisest of all men… who taught: אַל תִּתְחַכַּם יוֹתֵר – do not be overwise (Kohelet 7:16)… The ‘tam’ as the full Jew, is fully cognizant of the value of wisdom, and himself possesses learning in abundance. But he insists upon integrating learning into the the totality of a responsive, religious, reverent personality’.
And this is why I so love the ideas found in our daf – because though they are ‘tam’ – simple, they are also truly profound.
×
×