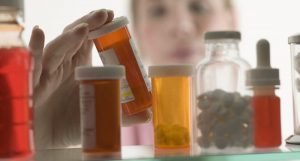 Bathing in salt water has long been considered to have medicinal benefits, and bathing eyes in salt water has long been regarded as being beneficial for the health of the eye. However, when it came to Hilchot Shabbat, our Sages (see Shabbat 53b) established a rule that non-essential healing was forbidden, and that medicines should not be taken on Shabbat since their production involved the act of טוחן (grinding) – which is counted among the 39 Biblically forbidden Shabbat activities.

In general, whenever a rabbinic decree was established, it was decreed and applied without exception – meaning that in the case of healing, even if a person possessed pre-prepared medicines that did not require grinding on Shabbat, the rabbinic decree forbidding healing would also apply to them.

With this in mind we can now turn to our daf (Shabbat 108b) where two fourth-century Amoraim of the Land of Israel, Ravin and Rav Yirmeya, while walking alongside the Dead Sea (or as the Gemara calls it, ‘the Sea of Sodom’), identify and address a halachic query relating to the use of natural salt water for the purpose of healing on Shabbat:

‘Ravin was walking after Rabbi Yirmeya on the shore of the Sea of Sodom. Ravin said to Rabbi Yirmeya: What is the ruling? Is it permitted to wash oneself with this water on Shabbat, [or perhaps it is prohibited because it has healing properties]? Rabbi Yirmeya said to him: One may well do so.’

Rashi explains that Rabbi Yirmeya gives a permissive ruling because the salt water already exists (i.e. it does not require any act of grinding for it to be produced), and because onlookers would not necessarily presume that the salt water is being used for healing.

But then Ravin asks Rabbi Yirmeya a follow-up question – this time relating to the use of salt water to heal and strengthen the eye:

‘[When washing oneself in water from the Dead Sea on Shabbat], may someone close and open [their eyes in the water so that the water gets inside]? Rabbi Yirmeya said to him: That case I did not hear… ‘

In contrast to the first case where onlookers would not necessarily presume that the salt water is being used for healing, here, when someone is seen to be deliberately opening and closing their eyes while washing with salt water it would be obvious to all that their intention is to use the salt water for healing, and as such, Rabbi Yirmeya clearly believed that this was problematic.

Today, when almost all medicinal pills and syrups are purchased ready-made and rarely require any kind of grinding or other forbidden labor, there are those who claim that the rabbinic decree against healing on Shabbat no longer truly applies and consequently people can take medicine on Shabbat without fear of what others may think.

Others disagree and insist that ‘whenever a rabbinic decree was established, it was decreed and applied without exception’ – and this is the general view as presented in most contemporary halachic handbooks.

Nb. a slightly shorter version of this thought was featured today on My Jewish Learning – see https://www.myjewishlearning.com/article/shabbat-108/