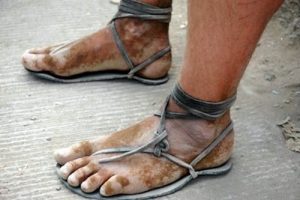 Whenever a halachic decisor is approached by someone with a halachic question, their task is to listen very carefully to every word and inflection of the questioner before starting to think about how to answer, because quite often, embedded in the question are clues that speak volumes about the questioner.
A case in point is today’s daf (Shabbat 112a) when, while discussing the Shabbat melachot of הקושר (tying a knot) and המתיר (untying a knot), we are informed that Rav Yehuda the brother of Rav Sala the Pious approached Abaye on Shabbat and asked whether he may untie the knots of the sandals he was wearing so that his son may then wear those same sandals (which would also require his son to tie them once again).
Before proceeding, it is important to note that when introducing this story, the Gemara relates that ‘Rav Yehuda had this pair of sandals, and sometimes [Rav Yehuda] went out wearing these sandals, and sometimes his son went out wearing them’ – meaning that this family were so poor that they had to share one pair of sandals between two people. However, this fact is not explicitly stated by Rab Yehuda in his question to Abaye which speaks only of a singular instance of Shabbat-sandal-sharing, rather than their constant reality of perpetual-sandal-sharing.
Initially, Abaye only focusses on the words of the question and not the clues in the question, and as such, he rules that untying the knots involves a biblical prohibition and therefore may not be done. To this, Rav Yehuda responded to Abaye by saying, ‘had you told me that this was merely rabbinically prohibited it would have been difficult for me, yet you are actually telling me that this is biblically prohibited?!’.
Here, Rav Yehuda doesn’t claim that Abaye is necessarily halachically wrong in theory. Instead, his response emphasises how the inability to share these sandals – thereby enabling only he or his son to wear them on Shabbat – would make their lives incredibly difficult. Still, Rav Yehuda does not explicitly provide Abaye with any further details that might necessarily change his halachic ruling. Given this, Abaye asks Rav Yehuda: ‘What is the reason?’ – as if to say, ‘Perhaps I have missed something here – what is so difficult with my ruling?’, to which Rav Yehuda responds by explaining that these sandals are shared by himself and his son in the weekdays too.
Having been told this fact, Abaye figured out that the knots being tied on these perpetually-shared-sandals are temporary as they never last more than 24 hours (which is an important halachic factor thereby meaning that the knots are not prohibited), and that Rav Yehuda was so poor that he and his son shared one pair of sandals (which is an important human factor thereby requiring greater leniency). Given all this, Abaye responded by saying, ‘If so, you can untie and tie these sandals on Shabbat without reservation’.
Fortunately, the right halachic answer was reached in these case. However, it is important to note that Abaye initially did not pick up on the clues in Rav Yehuda’s question, and it was only as a result of the emotional response of Rav Yehuda to a mismatched halachic answer that led Abaye to clarify whether he may have missed something in the question he was asked.
Of course, whenever a questioner presents a query to a halachic decisor, they should be encouraged to be as explicit as possible in their question so that essential clues and details are communicated. But let us not forget that, at least for some people, the very process of presenting a halachic query might by unnerving, and though it may be of great value for the decisor to be told a range of personal details, the questioner may not be fully comfortable in sharing these details.
And this is why the primary task of a halachic decisor isn’t to speak but to listen – very carefully – both to the words and the inflections of the question, as well as to the responses of the questioner during their conversation, because in these words, inflections and responses can be found critical clues and essential halachic facts that speak volumes.
×
×