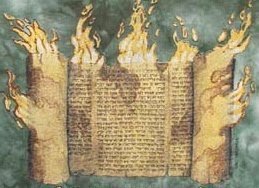 As we know, the Jewish people have been referred to as ‘the people of the book’, and since the beginnings of Jewish history, Jews have revered the word of God and the sacred scrolls in which the words of God are found. Given all this, the halachot presented in today’s daf (Shabbat 115a) aren’t merely factual halachot. Instead, they tug at the heartstrings of the Jewish consciousness.
The Mishna (Shabbat 16:1) begins by teaching us that כל כתבי הקודש – all holy scriptures – מצילין אותן מפני הדליקה – may be saved from a fire [on Shabbat]. Significantly, when I read these words, my mind conjures up the image of a burning Sefer Torah, and just as quickly, a visceral reaction is triggered inside of me such that I physically jump up as an expression of my desire to save this imagined burning sacred Torah scroll.
Of course, this reaction is hard to explain because surely – at the end of the day – a Sefer Torah is still just a thing. However, for the Jew, a Sefer Torah can never ‘just’ be a thing, because a Sefer Torah containing the words of God, is our spiritual anchor, our divine guide, and our ultimate source of life.
The Mishna then proceeds to explain that the law of מצילין אותן מפני הדליקה (i.e. these items may be saved from a fire on Shabbat) applies both to scrolls that are read on Shabbat (eg. scrolls of the Torah or the Nevi’im) and to scrolls that are not usually read on Shabbat (eg. scrolls of the Ketuvim), and that it also applies to scrolls written in Hebrew, as well as to scrolls written in any other language. What we learn from here is that the words and teachings of God come in different forms and they can be accessed in many languages. Yet, in each case, they are holy.
Having pondered all this I thought of the diversity of the Jewish people. Some Jews may liken themselves to a Sefer Torah. Others may liken themselves to a scroll of the prophets. While others may liken themselves to a scroll of Tehillim or one of the Megillot. Similarly, while some Jews speak Hebrew, others speak English, others speak French, Amharic, Spanish, Russian etc. Just as no two people are the same, so too, no two Jews are the same. Yet far too often in our often fractured Jewish community, we emphasise difference over similarity, and far too often we presume that we cannot find a shared language with Jews who see the world in different ways to us.
And then I think about my visceral reaction when imagining a burning Sefer Torah, and I know instinctively that many other Jews with many different religious perspectives to me experience that same visceral reaction – which simply goes to show that we are much more similar than we think, but that sadly, it is often only during times of difficulty and disaster (which may be compared to a fire) when these similarities are identifiable. Yet the sad fact is that there are those who will jump to defend and protect a Torah scroll, but who will think twice before defending or protecting a Jew who sees the world different from them. Admittedly this may sound grotesque – and this is because it is.
And this is why it is important not just to learn today’s daf but to meditate on it deeply, because until a Jew understands that we save all types of sacred scrolls, and until a Jew understands that they have a shared spiritual-emotional language with Jews who differ from them, they haven’t understood the principle of כל כתבי הקודש.
×
×