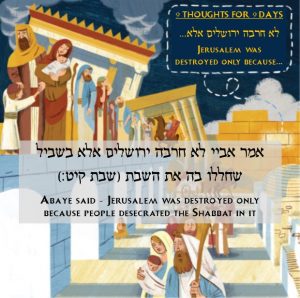 In today’s daf (Shabbat 119b) we find 8 different teachings attempting to answer the question of why Jerusalem was destroyed, and some years ago I wrote explanations to each of these teachings, along with a further teaching answering this same question found in Bava Metziah 30b. I called this project ‘9 Thoughts for 9 Days’ and I suggested that these 9 thoughts be read during the 9 days between Rosh Chodesh Av and Tisha B’Av to help us in our journey of spiritual improvement as we approach what many regard as the saddest day of the Jewish year. To download a pdf document with these ‘9 Thoughts for 9 Days’ see https://bit.ly/3dWYSHi.
Here is my explanation to the first of these teachings found on our daf as taught by Abaye, who said that: ‘Jerusalem was destroyed only because people desecrated the Shabbat in it’ – which seems particular fitting since: a) this is found in Massechet Shabbat, and b) today is Erev Shabbat:
***
Sadly, Shabbat desecration is often regarded as a norm of the modern Jewish world. However, Shabbat is undoubtedly a key cornerstone of Jewish living and a core expression of Jewish belief. As Ahad Ha’am famously remarked, ‘one can say without exaggeration that more than the Jews have kept Shabbat, Shabbat has kept the Jews’. Accordingly, the Talmud explains that the desecration of Shabbat by Jewish people within the holy city of Jerusalem contributed to the spiritually and societally imbalanced atmosphere that enabled the Churban to take place.
However, according to the Maharsha (on Shabbat 119b), there is also a deeper message contained in this statement. Basing himself on the prooftext of this teaching (from Yechezkel 22:26) which talks about how the Kohanim averted their eyes from the Shabbat, the Maharsha (Rabbi Shmuel Eidels, 1555-1631) explains that ‘given that most of the people were not familiar with many of the Shabbat prohibitions… the Torah scholars who – at that time – were the kohanim should have informed and taught the masses. But these kohanim turned their eyes away from the needs of the people, and this led to their desecration [of Shabbat]’.
Put differently, the conclusion of the Maharsha’s insight is not that ‘Jerusalem was destroyed only because people desecrated the Shabbat in it’. Instead, it is that ‘Jerusalem was destroyed only because people who could have educated and inspired others failed to do so, and consequently, this led to Shabbat desecration in Jerusalem’.
All too often religious leaders criticize the less observant for what they aren’t doing without looking into the mirror and asking whether they – as leaders – are doing enough. However, I am of the belief that there would be considerably less Shabbat desecration today if we took education and inspiration towards Shabbat more seriously than we took transgression and desecration.
So as we reflect on how we can spiritually improve, lets consider how we can positively promote and teach about Shabbat observance to those who are less knowledgeable and less observant – not only for their sake, but for ours as well.
Go to Top