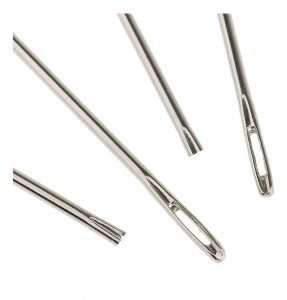 In today’s daf (Shabbat 123a), reference is made to the previous Mishna (Shabbat 17:1-2, 122b) beginning with the words כל הכלים (‘these are all the utensils that may be moved on Shabbat’) which states that while a needle’s normal usage should mean that it is categorized as ‘Mukzeh’ (set aside from Shabbat usage since sewing is forbidden on Shabbat), a needle can be used for other reasons such as for removing a thorn and is therefore not considered ‘Mukzeh’. However, the question raised by Rava the son of Rabbah in our daf is whether a needle which is broken and which does not have its eye is also not considered ‘Mukzeh’?

Rav Yosef initially finds this to be a strange question since whether or not a needle has its eye, it is equally effective at removing thorns. But Rava the son of Rabbah then qualifies his question by citing from Mishna Keilim 13:5 which states – within its discussion of the laws of טומאה (ritual impurity) – that a needle whose eye has been broken off is not considered a כלי (utensil) and is therefore not susceptible to טומאה (ritual impurity). Given this, if such a broken needle is not considered a כלי, then surely it does not fit into the necessary criteria of כל הכלים (‘these are all the utensils that may be moved on Shabbat’) and therefore perhaps such a needle should be ‘Mukzeh’?