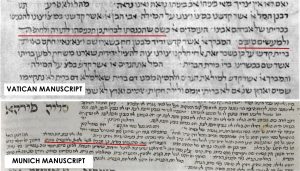 While we often presume that the text that we have in our Gemara is a perfect rendition of what was originally said by the Tanaim and Amoraim in Israel and Babylon, the many different Talmud manuscripts containing many textual variants provides us with ample evidence that there are words and phrases that appear in the standard Vilna edition of the Gemara that are subject to considerable debate.
A case in point can be found in today’s daf (Shabbat 137b) in relation to a phrase that is proclaimed by all those in attendance at a Brit Milah.
As the standard Vilna edition records: [After the Brit Milah has been performed], ‘those standing there proclaim: כשם שנכנס לברית כך יכנס לתורה לחופה ולמעשים טובים – “Just as he has entered into the covenant, so may he enter into Torah, marriage and good deeds”’. It should also be noted that this version is cited by the Rosh.
Contrasting this, numerous manuscripts – including the Munich and Vatican manuscripts of the Gemara – along with numerous halachists including the Rambam, the Rif & Tur, record an alternative text that reads: כשם שהכנסתו לברית כך תכניסהו לתורה ולחופה ולמעשים טובים – “Just as you have entered him into the covenant, so too may you enter him into Torah, marriage and good deeds”.
As should be clear, this version differs significantly from the standard text, and rather than referencing the young boy who has just undergone a Brit Milah, it talks directly to parents – or more likely, to the father – of the young boy.
However, notwithstanding the fact that this second version appears in many more of the extant manuscripts and in the writings of many more leading Rishonim, it is of interest that this is not the formula found in the standard Vilna edition, and nor is it the formula found in our siddurim or used today.
Addressing this point, the Shach (YD 265:3) notes that the reason for this is because ‘sometimes the father is not present [at the Brit Milah of his son], and someone the son has no known father. Given this, since we cannot [always] recite these words as if [the father] is present, more veiled language was preferred, and given that this was the case, it was decided to do so without exception [i.e. even when a father is present]’.
Presuming the Shach is correct, I think it is remarkable that a choice was made to adapt what was the traditional blessing offered at a Brit Milah in order to show sensitivity to fatherless children, and each time we are blessed to be at a Brit Milah and therefore have the opportunity to recite these words, I believe we should take a moment to reflect on the message of the Shach.
But there is a further message that we can also draw from the Shach, and this relates to the sensitivity that we should show, and our preparedness to adapt our language in relation to, communal announcements and events. To take just two simple examples, many shuls have learning programmes titled ‘Avos U’Banim’ (literally, ‘fathers and sons’) which presumes that all sons have a father who can accompany them and learn with them (which is obviously not the case). Similarly, many Bat-Mitzvah programmes are often referred to as ‘Mother-and-Daughter’ programmes, which presumes that all daughters have a mother who can accompany them and participate in the programme with them (which is also obviously not the case).
While most of us mean no harm by these phrases, they can often be a source of great pain for the orphans and single-parent children in our communities, and they can be a contributory factor why the most vulnerable members of a community – whom we should be doing all we can to include in the community – feel excluded from a community.
And this is why it is essential for us to reflect on the words of the Shach, and while doing so consider whether the words and phrases that we use – as individuals and especially as communities – include, rather than exclude.
×
×