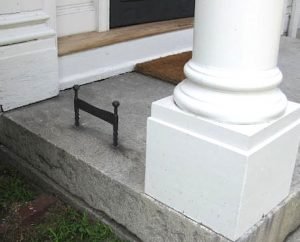 Today’s daf (Shabbat 141a-b) discusses the question of whether it is permissible to scrape mud/clay from shoes with a sharp object on Shabbat. As Rashi explains, this is due to the concern that by doing so the leather sole of the shoe will be smoothened (ממחק) which is one of the 39 Biblically forbidden Shabbat activities (see Shabbat 73a).
In terms of the flow of the Gemara, we are first taught a Beraita that permits such activity. Then we are taught the view of Rabbi Avahu who permits doing so with new shoes (because, as Rashi explains, their leather is tougher), but not with old shoes. However, the Gemara then cites the view of an elderly sage, quoting a Beraita taught by Rabbi Chiya, that ‘we may not scrape either a new shoe or an old shoe’ – and this is the halacha as codified in the Shulchan Aruch (Orach Chaim 302:8).
Based on this, the Taz (OC 303:3) writes in his commentary to the Shulchan Aruch that: ‘the iron bar that is placed in the ground outside the entrance of a synagogue, and which has a sharp edge at its top for worshippers to scrape their shoes prior to entering the synagogue, may not be used on Shabbat’. Seemingly in contrast to this ruling, the Magen Avraham (OC 302:17) writes in his commentary to the Shulchan Aruch that ‘the Maharil would scrape his shoes on the iron bar that was placed by the entrance of the synagogue’. However, the Magen Avraham then suggests that in the case of the Maharil, the bar was thick rather than sharp at the top which would have technically meant that such action would be permissible. Nevertheless, he still suggests that this should preferrably not be done. Mishna Brura (OC 302:38) rules in accordance with the reasoning of the Magen Avraham and therefore states that if the bar is thick and not sharp then it is permissible to scrape one’s shoes on it on Shabbat, especially if done with care (see MB 302:26).
Today our shoes are made quite differently to those of the past. Some aren’t made of leather at all; some are made of leather but don’t have leather soles, and some that are leather and have leather soles are made to very different standards than previous generations. Given all this, to what extent does this law apply today?
In ‘Shulchan Shlomo’, it is noted that Rav Shlomo Zalman Auerbach was unsure whether the concern for ממחק still applied to modern shoes, and given this he simply stated ‘צריך עיון’ – which literally means ‘this requires further examination’.
However, according to Rav Ben-Zion Abba Shaul (see his Responsa Or LeTzion Vol. 2 24:5), ‘while the Mishna Brura cited those Acharonim who forbade doing so when the iron was sharp out of concern [for the melacha] of ממחק, it would appear that nowadays [scrapping shoes] it is permitted [on Shabbat] because the majority of shoes that are worn today do not have a leather sole and therefore ממחק is not a concern, and even those that do have a leather sole are made in a very different manner to the past such that the leather does not rub away by cleaning the sole on the iron bar’.
While some may agree with the logic of R’ Abba Shaul, I suspect that others will not. Still, I believe that this serves as a good example where an understanding of the developments in the modern era – in this case in terms of the manufacture of shoes – is central to an understanding of the application of particular halachot to the modern era.
×
×