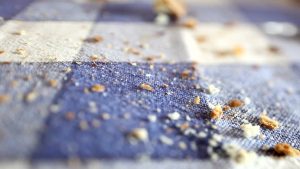 Today’s Mishna (Shabbat 21:3, 143a) discusses the treatment of seemingly purposeless small crumbs of food that remain on a table after a meal – which we are told may be removed from the table because they can be used for animal fodder. However, as the Gemara proceeds to explain, if the crumbs are not used for this purpose, they should not be directly destroyed.
Interestingly, while the Shulchan Aruch (Orach Chaim 308:27) briefly addresses this particular topic in its treatment of the laws of Shabbat, an entire chapter of the Shulchan Aruch (Orach Chaim 180) is dedicated to the treatment of breadcrumbs and other food remnants in its ‘Laws of Mealtimes’, where we are told that care should be shown that small crumbs left after a meal don’t get ruined by the water used for washing hands at the end of a meal (Mayim Acharonim), or don’t get trampled on by those present if they have fallen onto the floor. This – along with a number of teachings found elsewhere in the Gemara and in the mystical writings – is the reason why many people are particular to collect left over crumbs – especially breadcrumbs – in napkins, such that even if there is no animal to whom the food can be given, these crumbs are disposed of in a dignified manner.
Of course, there may be some people who think that such care for crumbs is a little extreme, and it should be emphasised that we are not talking about large pieces of food here but ‘only’, or as some may prefer, ‘just’ crumbs.
However, while words like ‘only’ or ‘just’ feature regularly in our daily conversations and are used by many of us to dismiss what is not important in our eyes, very few things in life are ‘only’ or ‘just’ – meaning that our words and actions, even if we think they are inconsequential, can often have a significant impact on others.
For example, imagine someone said something that upset you and they then sought to justify themselves by saying ‘I only said…’ or ‘I just said…’. By doing so they are clearly trying to communicate that they did not think their words were significant or consequential.
But let us never forget that no matter what people say to justify their words, words do matter – however ‘small’ they are.
×
×