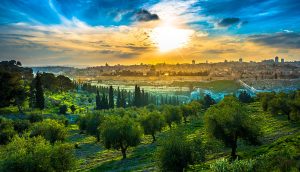 Today’s daf (Shabbat 145b) cites a heartrending verse from Sefer Yirmiyahu (Jeremiah) 9:9 describing the emptiness and loneliness of the land of Israel following the destruction of the First Temple and the exile of the people:
“For the mountains I will raise [My voice] in weeping and wailing, and for the pastures of the wilderness a dirge, for they are parched, without a person passing by, and they will not hear the sound of cattle; from bird of heaven to animal, they have wandered off and gone.”
As noted in our daf, this verse contains an allusion to the 52-year period immediately following the destruction of the First Temple when there were no Jewish residents in the Land of Israel, and it is this level of complete desolation and emptiness that Jeremiah describes in the opening words of Megillat Eichah that we will be reading tonight on Tisha B’Av: ‘Alas – she sits in solitude’.
Since then, and notwithstanding the many further persecutions that have taken place, there has continued to be a Jewish residence in the land. Still, much of the pain that we recall on Tisha B’Av – beginning with the episode of the spies which caused a 40-year delay from entering the land – relates to the deep covenantal relationship between the Jewish people and the land of Israel and the profound pain of separation stemming from the fact that since the Churban, most Jews have not lived in the land.
What this means is that while Tisha B’Av commemorates the destruction of the Temples, it also commemorates the separation of a people from its land – a separation that has caused great pain to the people, and great anguish to the land.
And yet… here I am, sitting in Israel, writing this Daf Yomi thought while hearing the birds resting on nearby trees singing their song. Moreover, just two nights ago I had the privilege of visiting Yerushalayim (Jerusalem) where I both mourned for the Temple – but also acknowledged my ability to be there in order to do so.
Reflecting on a future time of redemption, Yirmiyahu (33:10-11) prophesied:
“Thus said Hashem: There will again be heard in this place about which you say, ‘It is destroyed, without person or animal’ in the cities of Judah and in the streets of Jerusalem that are desolate without people and without inhabitants and without animals, the sound of joy and the sound of gladness, the sound of groom and the sound of bride”. Remarkably, this is what I and all those who live in or visit Israel are fortunate to see and hear on a daily basis.
The verses then continue to refer to a time when we will hear ‘the sound of people saying, ‘Give thanks to the Lord of Hosts, for the Lord is good, for His kindness is everlasting!’. This refers to the spiritual connection between people and God, and while the Jewish people take pride in their faith, this is something that we need to strengthen further in our time.
The verses then refer to a time when ‘they bring the thanksgiving offerings to the House of the Lord’. This refers to the Temple which remains a gaping hole in our lives and is what we hope and pray for on a daily basis.
Finally, the verses end with a promise from God, ‘For I will restore the captivity of the land as of old’ – which refers to the ingathering of the exiles to the land. Baruch Hashem this is happening, and we hope and pray that it will continue!
×
×