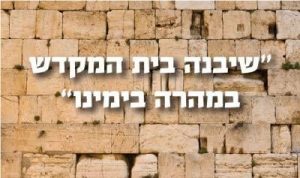 Today’s daf (Shabbat 146a) teaches us a key principle about the biblical melacha of מכה בפטיש (literally ‘one who strikes with a hammer’, but understood to refer to any activity – such as striking the final hammer blow – that completes the manufacture of an item) which I believe resonates deeply with the essence of today, namely Tisha B’Av.
We are taught by Rabbah that, at least on a biblical prohibition level, כל פתח שאינו עשוי להכניס ולהוציא אינו פתח – any opening that is not made [on Shabbat] to both enter (bring in) and exit (take out) is not considered to be an opening – which means that any opening that is created has to be a two-way opening.
As we know, since the first year of our nation’s liberation when ten of the spies returned with a critical report, Tisha B’Av has been an ‘opening’ where tragedy has befallen the Jewish people and where persecution, violence and destruction has entered our communities and our nation.
At the same time, there is also a tradition stating that Moshiach is born on Tisha B’Av (see Yerushalmi Brachot 2:4), meaning that the very ‘opening’ when tragedy has befallen the Jewish people will, בע”ה, be the day when the beginning of our ultimate redemption begins – such that ‘the fast of the fourth month, the fast of the fifth month, the fast of the seventh month and the fast of the tenth month will be to the house of Yehuda days of joy and happiness and festivals’ (Zechariah 8:19).
According to the Sefer Yetzirah (5:9), the Mazal of Av is אריה – a lion, and it is of note that Nebuchadnezzar – the Babylonian leader who destroyed the first Temple – was compared to a lion (see Midrash Eichah Rabbah 3:4, Pesikta D’Rav Kahana 13:15). At the same time, a lion is renowned for its strength, its determination, and its ability to use its inner force to fight back while still maintaning its splendour and nobility, and every morning we are each urged to wake up ‘like a lion’ to serve our Creator (Avot 5:20, Tur OC 1:1).
Ultimately, Tisha B’Av is a פתח – a two-way opening. Throughout our history much tragedy has befallen our people on this day. But we hope and pray that Tisha B’Av is also the day that sows the seed for improved and kinder behaviour, for greater loyalty to God, and בע”ה, for the ultimate redemption.
×
×