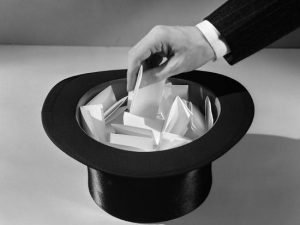 Much of the 23rd Chapter of Massechet Shabbat concerns permitted and forbidden actions and expressions that may lead to, or that appear similar to, financial dealings on Shabbat, and in this spirit the Mishna at the end of yesterday’s daf (23:2, 148b) – which is discussed at length in today’s daf (Shabbat 149b) – teaches that a lottery system may be used to divide up food in a family and to divide the sacrificial meat offered on a Yom Tov between Kohanim, but this may not be done for the sacrificial portions that were previously available on Erev Yom Tov.
Before proceeding, it is of note that the Mishna permits – and seemingly even endorses – using a lottery system to divide up food in order to maintain Shalom Bayit (peace in the home) so that all members of a family or all members of a priestly group feel that they had a ‘fair chance’ of receiving a particular portion of food (nb. the fact that a lottery is used for this purpose is evident from the use of the word מפיס in the Mishna which, while translated as ‘a person may draw lots’, actually translates as ‘a person may appease another [by drawing lots]’). Sadly, there are homes when some members of the family can feel that they are deliberately given the smaller size or the poorer quality piece of food, and work settings where some members of a team often feel discriminated against. Therefore, by making reference to the use of a lottery, our Mishna is teaching us that every home and every work setting should do all it can to ensure that all its members feel that they are treated fairly.
Considering this point, Rabbi Hayyim David Halevy (Sh’ut Mayyim Hayyim 1:19) was once asked by members of a synagogue to consider how certain honours are given out in the synagogue service and whether a lottery system can – or should – be used.
Specifically, it is customary in many synagogues for certain mitzvot to be distributed according to the highest financial bidder whose money is then used as a donation to support the running of the synagogue. However, while this system is financially beneficial to the synagogue, it is obviously highly discrimatory. There were those in this particular synagogue who suggested a move away from mitzvot-for-money to a lottery system, but there were others who felt that a lottery was not a spiritually appropriate way to distribute mitzvot. Given this, a letter was written to Rabbi Halevy for him to adjudicate this question.
In his wide-ranging responsum, Rabbi Halevy makes reference to the many instances in Jewish history where lotteries have been used, he explains that lotteries are an effective way to avoid conflict and maintain peace, and he naturally makes reference to the above-mentioned Mishna and Gemara.
In particular, an essential consideration of his responsum is whether a lottery can be used to divide up unequal portions amongst a family which the Mishna forbids but which the Gemara seemingly permits (nb. on this point, see Shulchan Aruch Orach Chaim 322:6), and the extent to which this principle can be applied to mitzvot where the mitzvot cannot be divided up equally. However, based on the Magen Avraham (OC 322:9) he distinguishes between mitzvot (which you cannot steal) and physical objects (which you can), and rules like the Magen Avraham that a lottery can be used for this purpose.
Rabbi Halevy concludes his responsum by noting that a lottery system clearly is a fairer one, but that a lottery system involving drawing names from a box is more problematic on Shabbat (see Mishna Berura OC 322:24). Therefore, if the synagogue does choose to use a lottery system, the lottery should ideally be done on the weekday (and not on Shabbat) and in the presence of all the interested parties to avoid any claim of impropriety, ‘so that everything is done in a correct and transparent manner’.
×
×