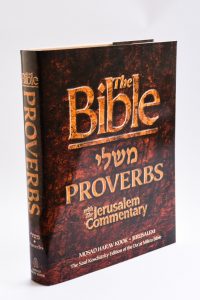 This morning I will be delivering my penultimate shiur on Sefer Mishlei (The Book of Proverbs) to a fabulous and incredibly learned group of women. Yet, notwithstanding the significant Jewish learning accomplishments of many of those in the shiur, most of the participants would admit that this year has been the first time that they have seriously studied the wisdom of Sefer Mishlei.
I mention this because today’s daf (Shabbat 152a-b) makes numerous references to Kohelet (Ecclesiastes), Mishlei (Proverbs) and the Nevi’im (the books of the Prophets), and because – towards the end of the daf (Shabbat 152b) – we read a curious conversation between Rav Nachman and the corpse of Rav Achai Bar Yoshiyah which includes a stinging critique about Rav Nachman’s lack of Biblical literacy which most certainly remains relevant to many of us today.
In terms of the conversation, much of it is centred on the question of why the corpse had not decomposed since, as Rav Nachman explains, it has been taught in Kohelet 12:7 that ‘the dust shall return to the earth as it was’. In response, the corpose of Rav Achai Bar Yoshiyah responded, “he who taught you Kohelet [evidently] did not teach you Mishlei, for [it says in Mishlei 14:30] ‘the rotting of bones is [caused by] envy]”’. Then, Rav Nachman invited the corpse to go to his home, to which the corpse responded, “[by asking this question] you have shown that you have not even read the Nevi’im (the Books of the Prophets)! For it is written [in Yechezkel 37:13] that ‘you will recognize that I am God when I open your graves’”.
Clearly this conversation can be interpreted in a variety of ways, but as mentioned, I would like to focus on the topic of Biblical literacy – or the lack thereof – as emphasised by Rav Achai Bar Yoshiyah, and ask why is it that so many of us – myself included – have simply not read or pondered the wisdom of some of our greatest biblical books.
Admittedly, this is not the first time I have considered this question, and given this, I suspect that at least some of those reading this are likely to be thinking how various educational instutitions – Jewish Elementary, Middle & High School – may be to blame.
However, while this answer is true in part, I believe that a truer answer to this question is found in a sermon of Rabbi Dr. Norman Lamm which, having first encountered it some years ago, has become somewhat of a mantra to me.
In this sermon, titled ‘Be Not Overwise’ (which was delivered on Pesach 1964 and can be downloaded from https://bit.ly/2BfaSqf), Rabbi Lamm attempts to offer a refreshing interpretation to the personality and to the spiritual qualities of the Tam (the ‘simple’ son) that is mentioned in the Haggadah, and it is here where he says as follows:
“Our society in general suffers from an overabundance of knowledge (chochma) at the expense of [our] wholeness (temimut)…[In fact], in our Jewish world, we suffer from a horrendous ‘am haaratzut’ (level of ignorance)…Look in any Jewish bookshop and you will be impresed by new books on so-called “Jewish theology.”…I have met readers of this brand of wisdom in all parts of the world — Jews who weigh every word of Buber, but have never read through the Bible, even in translation! … There is too much chochma and too little temimut…Let us not forget that it was Solomon, the wisest of all men… who taught: אַל תִּתְחַכַּם יוֹתֵר – do not be overwise (Kohelet 7:16)…”
For the sake of clarity it is important to note that Rabbi Lamm was not of the opinion that sophisticated Jewish thought should not be read or studied. However, his point was that, all too often, we sacrifice our knowledge of the ‘basics’ for the appearance of intellectual sophistication. However, by doing we fool ourselves into thinking that we are Jewishly literate when we are, in truth, profoundly ignorance of some of the most basic teachings and values of Judaism.
As mentioned, while I believe this sharp critique applies to many people, the primary reason why it resonates so deeply within me is because I am among those who, at some stage in my life, did precisely what Rabbi Lamm is describing. But then I read his words, and they gave me a jolt, and since then I have been working hard to try and address them.
Please G-d, next week, I – and those who I am privileged to teach – will ‘complete’ our study of Mishlei. But while, over this past year, we have gained much wisdom from learning Mishlei, I suspect that most of the participants would agree that Mishlei has given us even more than wisdom. And what may that be? I believe the answer is found in the words of Rabbi Lamm, namely ‘a greater sense of wholeness (temimut)’. And if you’ve yet to feel what you think I am describing, I suspect the time has come for you to learn Mishlei as well.
×
×