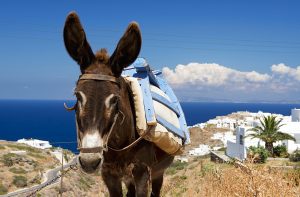 In yesterday’s Mishna (Shabbat 24:1, 153a) we were taught that if someone arrives at a city once Shabbat has commenced, they may directly remove any non-mukzeh items from their donkey. However, if their donkey is carrying any bags of mukzeh items, these can only be indirectly removed from the donkey by releasing the ropes that are holding them and allowing them to drop to the floor.
Of course, allowing certain items to fall from a donkey runs the risk of them breaking. Given this, Rav Huna rules in today’s daf (Shabbat 154b) that pillows and cushions may be placed under the donkey when releasing the ropes – so that when the mukzeh items do fall from the donkey, they do not break.
Reflecting on this specific Hilchot Shabbat rule I believe that we can learn an important life lesson, which is that there are times in life when we can take certain things by the hand, but there are other times when we need to let things fall away from us. However, even when we do so, we should do all we can to make sure that such a fall does not cause damage.
However, the Gemara then notes that while pillows and cushions can protect small and light objects from being damaged, there are times when mukzeh items are large and heavy such that even with the use of pillows and cushions, it is possible that such items may become damaged from a fall. According to the Gemara, if such damage would be very minor (either physically or financially), then the person should allow the items to fall, whereas if significant damage would occur, the person should remove those items by hand (see Rambam Shabbat 21:10 & Shulchan Aruch OC 266:9).
What this rule teaches us is that there are occasions when some of us need to let big things fall away from us (nb. there are many examples of this but these include relationships, friendships, a business, a particular life project etc.) and that even if this causes very minor damage – still, this is the necessary cost of release. Nevertheless, if by doing so major damage will be caused – we should remove those big things by hand to avoid significant damage.
×
×