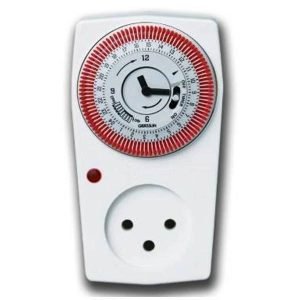 Today’s daf (Shabbat 17b) includes Mishnayot (Shabbat 1:5-9) listing numerous disputes between Beit Shammai and Beit Hillel about the resting of utensils on Shabbat.

Beit Hillel disagrees, and they rule that as long as a person is not actively involved in the ‘melacha’ during Shabbat, our utensils may ‘perform melachot’ on Shabbat. Consequently in both the above-mentioned cases the items may be left to soak over Shabbat even if the chemical processes continue during Shabbat.

Unlike the previous list of 18 enactments (see Shabbat 13b), here – like most other cases – we follow Beit Hillel (see Shulchan Aruch OC 252:1), and based on this Mishna it is commonplace today for us to turn on a hot plate or a light on Erev Shabbat while knowing that it will turn off at a specific time on Shabbat through the use of a Shabbat timer.

However, it is significant that our Mishna only speaks about a melacha that has been initiated on Erev Shabbat which may naturally continue on Shabbat, but it does not suggest that a melacha may, through a form of automation, be initiated on Shabbat.

Based on this distinction Rav Moshe Feinstein firmly ruled (Iggrot Moshe OC 4:60) that Shabbat timers should not be used to initiate most melachot on Shabbat (nb. since there was a precedent of having non-Jews turn on and off lights on Shabbat, he does permit the use of timers to turn lights on and off on Shabbat). As he wrote: “in my humble opinion, it is obvious that it is forbidden to permit this because, through the use of such automation, one can perform all of the forbidden labour of Shabbat and operate every factory, and there is no greater degradation to Shabbat than this. It is obvious that had this existed in Talmudic times, they would have forbidden this in the same manner in which they forbade asking a non-Jew to perform work on one’s behalf on Shabbat.”

It is often thought that R’ Moshe’s rulings were accepted by all. However, in this instance almost every other halachic authority did not accept his position (nb. for a comprehensive list, see Petichat HaIggrot pp. 254-256). According to them, just because the Mishna did not mention an example of automated melacha does not mean that were such technology to have been possible at that time that it would have been forbidden. Moreover, those who opposed R’ Moshe’s position asserted that it was not our place to enact new decrees especially if this made Shabbat observance more difficult for the masses.