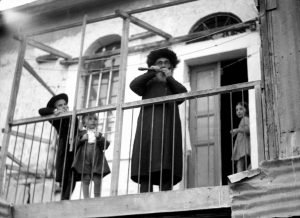 Today’s daf (Shabbat 35b) cites a Beraita recording a custom of how the shofar was blown six times in Jewish villages, towns and cities in Israel on Erev Shabbat which, as explained in Mishna Sukkah (5:5), was a custom dating back to the time of the Temple.

We are told that the first of these blasts was to help make sure that those working in the fields to cease their work and start making their way home, the second was for those who were working within the city, the third was – at least according to R’ Yehuda HaNassi  – a reminder to remove tefillin which at that time were worn throughout the day but are not worn on Shabbat, and the remaining – which were blown some time later – served as a reminder to light the Shabbat lights and to inform the people that Shabbat was soon to begin.

Interestingly, the Gemara then records that Jewish communities in Babylon also blew the shofar on Erev Shabbat for this purpose but they did so in a different order. This bothered Rabbi Shimon Ben Gamliel (II), and while no reason is given why he was so troubled, it seems that this was a reflection of his time and place. The Temple had recently been destroyed and Rabbi Shimon very much wanted to ensure that Jewish customs – especially those connected to the Temple and Jerusalem – were neither diluted or lost during this time of persecution and exile. However, the Beraita then ends with a response to Rabbi Shimon’s challenge that the custom of the Jewish communities in Babylon was, by this point, already well established and therefore they too needed to preserve their custom even if it differed from that of the Jewish communities in Israel. We can imagine that this response may well have still bothered Rabbi Shimon, but from here we learn a simple lesson that if you want to defend well-established customs, you need to be prepared to defend well-established customs that differ from your own.

In terms of codified Jewish law, while Rabbi Yosef Karo in his Shulchan Aruch (Orach Chaim 256) records this as an ancient practice, Rabbi Moshe Isserles (ibid.) states that Ashkenazic communities used a town cryer to call out to the community – in some communities 30 minutes before Shabbat and in others an hour before Shabbat – and that ‘this was done in place of the shofar that was blown in their days’. Writing around 350 years later, the Mishna Berura then adds (note 2) that in larger communities where a town cryer will not be effective, ‘it is very appropriate to find volunteers to go around the streets to encourage people to close their shops and to light the Shabbat lights’.

Still, some communities continued to use a shofar till recently. In Jerusalem, a shofar was blown in some neighbourhoods well into the 20th century (see picture) while today a siren is sounded there, and even till today, a shofar is blown on Erev Shabbat in the Jewish community in Djerba.*

But no matter how your community reminds you that Shabbat is soon to begin, we learn from here that though customs adapt to times and places, many of them have ancient roots, and all of them serve to remind us of our precious Torah laws and values.