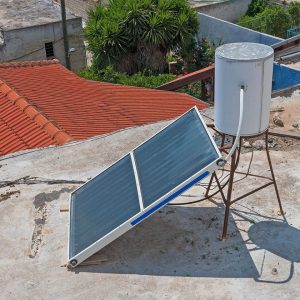 Having discussed the prohibition of cooking with fire on Shabbat as well as any act that manipulates an already lit fire on Shabbat, today’s daf (Shabbat 39a) addresses whether it is permitted or prohibited to harness the heat from more indirect sources that a person cannot directly manipulate to cook on Shabbat. For example, may you fry an egg on Shabbat with the heat of the sun?

The Gemara clearly states that such an action is permissible on Shabbat. However, an important detail to this discussion, first mentioned in the previous Mishna (38b), concerns a debate between the Sages and Rabbi Yossi about the cooking of a food (eg. an egg) using the heat of an item that has been heated by the sun. Here Rabbi Yossi permits such actions on the basis that this is comparable to cooking with the heat of the sun, while the Sages forbid such methods because they compare this to the prohibited action of indirect cooking from the heat of a fire. Here we follow the ruling of the Sages (see Shulchan Aruch Orach Chaim 318:3) which means that while solar heat itself may be used on Shabbat, an item heated by solar heat may not.

As you may imagine, where the line is drawn here is a matter of debate. For example, according to Rabbi Shlomo Zalman Auerbach (Shulchan Shlomo 318:13) and Rav Ben-Zion Abba Shaul (Or LeTzion Vol. 2 30:2) water heated in a ‘dud shemesh’ (a solar heated water tank) is considered to have been heated directly by the sun. However, Rabbi Eliyashiv (Shvut Yitzchak, Dud Shemesh 10:1) and Rabbi Nissim Karelitz (Chut Shani Vol. 2 29:6) argue that since there are intermediate technologies enabling the water to be heated in a ‘dud shemesh’, it is considered to be comparable to an item heated by solar heat.

One may wonder why there is a debate on this issue since surely this is simply a technical question which a technician should easily be able to answer. However, as Rashi explains on our daf while explaining the difference of opinion between Rabbi Yossi and the Sages, rabbinic decrees are established out of concern that permitted actions are not perceived as permitting prohibited actions. From here we learn that decisions in Jewish law aren’t only influenced by a technical understanding of technology, but also, by our understanding of how people perceive the workings of technology too.
×
×