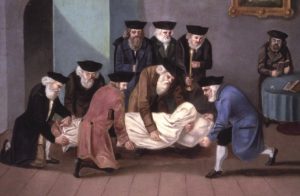 Today’s daf (Shabbat 43a-b) focusses its attention on the laws of mukzeh and the situations that may justify infractions of, or the overriding of, the mukzeh laws.

Specifically, much of Shabbat 43b discusses the laws of moving a corpse on Shabbat (which halacha categorises as being ‘mukzeh machmat gufo’) either due to it being directly in the sun (a topic previously addressed on Shabbat 30b with respect to the moving of the corpse of David HaMelech on Shabbat), or due to the fact that it is in a location where a fire is spreading towards (but where there is no risk to other lives which would then justify the extinguishing of the fire).

While different solutions are presented in our daf to enable the moving the corpse, and while later authorities offer further solutions to this problem (see Mishna Brura 1 on OC 311 and Piskei Teshuvot on 311:1), the key point here is that this may be done. But what is the rationale for this ruling?

According to Rabbi Yehuda Ben Lakish (Shabbat 43b-44a) who addresses the case of moving a corpse from a location where a fire is approaching, this is permitted because a person would be so distressed by the idea that the corpse of their relative might burnt that were permission not be granted for them to remove the body (which is a rabbinic transgression), they would likely put out the fire themselves (which is a Torah transgression other than where life is in possible danger).

However, while R’ Yehuda Ben Lakish’s rationale seems very comprehendable in this instance, it also sounds highly subjective and as Tosfot (Shabbat 44a DH Mitoch) notes, it is of significance that the Gemara (Shabbat 117b) rejects the exact same reasoning used to justify the extinguishing of a fire on Shabbat if only physical possessions are at risk of harm. What this means is that while human feelings play a role in the deciding of Jewish law, Jewish law is not decided on feelings alone. Instead, as the Aruch Hashulchan (OC 311:1) explains, while the reasoning of R’ Yehuda Ben Lakish must be acknowledged as a factor in determining such laws, the primary rationale for permitting the moving a corpse, either due to the sun or due to a fire, is the principle of ‘Kavod HaBriyot’ – which some translate as ‘human dignity’, while others translate as ‘human honour’ or ‘human respect’.

And why do I think this point is so important? Because while only the living have feelings, the principle of Kavod HaBriyot applies to the dead as well. And thus our Gemara comes to teach us that even when God takes back someone’s soul, their body is still regarded as a sacred vessel deserving of dignity, honour and respect.