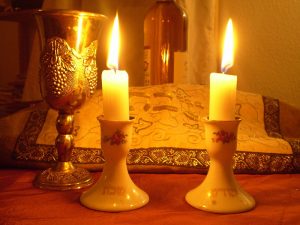 Today’s daf (Shabbat 44a) discusses the question of whether a lamp – which in this case would have been an earthenware lamp either simply shaped like a cup or more likely with a nozzle and handle – is considered mukzeh and therefore may not be moved on Shabbat. Though Rabbi Yehuda distinguishes between an ‘old lamp’ (i.e. one that would be soiled with oil and thus due to its unsuitability for any other use is considered mukzeh) and a ‘new lamp’ (i.e. one that is not soiled and may have other uses e.g. storage), Rabbi Meir responds and says that ‘all lamps may be moved except for those in which a flame has been lit in them for Shabbat’. This is because on the onset of Shabbat the lamp was kindled, and therefore by dint of its active flame became forbidden to be moved.

Before proceeding further it is important to explain that the concept of ‘mukzeh’ means ‘set aside’ and is used to refer to objects that have not been not designated on the onset of Shabbat for use on Shabbat or which have no evident or appropriate permitted Shabbat use. Yet it is precisely given this logic that led Rabbeinu Nissim, the Ramban and the Rashba to argue that if one made a ‘Tnai’ (condition) on the onset of Shabbat to move a lamp – or, more common in our days, candlesticks – once the flame has extinguished, then this would remove them from the category of mukzeh. Significantly and this is the opinion of Rav Yosef Karo in his Beit Yosef and as codified in the Shulchan Aruch (OC 279:4), with recent authorities such as Rav Ovadia Yosef (see Yalkut Yosef OC 279:3) adopting this position.

However, as R’ Karo explains in his Beit Yosef commentary (where the references to all the above-mentioned Rishonim can be found), there were those who disagreed with this logic including Rabbeinu Yerucham, Tosfot and the Rashbash since, during the key period of ‘bein hashmashot’, the lamp or candlesticks were lit and therefore mukzeh. As the Rema writes in his Darchei Moshe and in his gloss to the Shulchan Aruch (OC 279:4), the Ashkenazic custom reflects those who reject such a ‘Tnai’ (condition), with recent opinions such as the Chazon Ish (Shabbat 44:13) also reflecting this position.

Clearly this presents a compelling challenge to those who permit the use of a ‘Tnai’, so we need to consider what would be the basis for permitted the moving of candlesticks, and this brings us back to the distinction mentioned above about ‘old’ and ‘new’ lamps and the possibility of their use for other purposes.

It would seem – and here it is important to be clear that this is a tentative historical observation although one supported by the Chazon Ish (ibid.) and the Aruch HaShulchan (OC 279:1) – that the permission granted by the above-mentioned Rishonim to invoke a ‘Tnai’ was due to the fact that they – like those during the Mishnaic period – used their candlesticks both for lighting oil/candles and for storage. However, since our candlesticks are only used to kindle Shabbat lamps, it would seem that such a condition may not be invoked. Yet such argumentation is also problematic since, as noted above, the distinction between ‘new’ and ‘old’ lamps – and the consequent dual use of a lamp – was overuled. It is no wonder that the Chazon Ish concludes his remarks with the abbreviation צ”ע – this requires further elucidation!