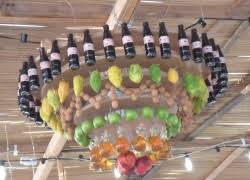 Specifically, it was customary – as it is in some communities till today – to adorn sukkot with ‘nuts, peaches, almonds, pomegranates, clusters of grapes, wreaths of grain, and bottles of wine, oil and flour’, and according to the Beraita cited in our daf, all this is prohibited for use and deemed mukzeh for the entire sukkot festival.

However the Gemara then states that ‘if a person made a ‘Tnai’ (condition) about them (i.e. these decorations)’ – which, according to Gemara Beitzah 30b means that if the individual made a declaration prior to the start of sukkot that they have the right to remove these fruits and use them for a purpose other than their mitzvah use as sukkah decorations – they may do so’.

In contrast to our previous discussion (Shabbat 44a) concerning items that are deemed mukzeh by dint of their prohibited use (eg. a Shabbat lamp) where the suggestion of invoking a ‘Tnai’ was originally presented in the writings of the Rishonim (Rabbeinu Nissim, the Ramban and the Rashba), here the suggestion is offered by the Gemara itself and without challenge. Thus it is unsurprising that the possibility for invoking such a condition is codified by Rav Yosef Karo in the Shulchan Aruch (OC 638:2). Yet notwithstanding the seemingly unanimous support for such a ‘Tnai’, the Rema writes in his Darchei Moshe and in his gloss to the Shulchan Aruch (ibid.) that ‘nowadays we do not have the custom of invoking such a Tnai’ because ‘we are not expert (אין אנו בקיאין) in making Tnaim (conditions)’.

It should be noted that the phrase ‘we are not expert (אין אנו בקיאין)’ is invoked repeatedly by the Rema in a range of his halachic positions, yet in this instance it is hard to comprehend since, as the Magen Avraham points out (OC 638:8), the text of this Tnai is explicitly found in the Gemara (Beitzah 30b). Moreover, as R’ Shmuel Kamenetsky has suggested (Kovetz Halachot: Sukkah p. 153), it is possible that this Tnai, which a person makes with themselves, need not even be said out loud.