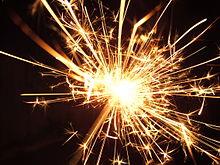 The final Mishna in Perek Kirah (Shabbat 47b) – as understood by the Gemara – states that it is permissible to place a plate or bowl under a lamp on Erev Shabbat to catch the sparks that fall from the lamp, but that it is forbidden to place water in that plate or bowl ‘because [the water] will thereby extinguish the sparks’.

On first glance this ruling is problematic because while ‘extinguishing’ is a forbidden melacha on Shabbat, this Mishna is prohibiting an act performed on Erev Shabbat that will indirectly (i.e. ‘grama’) extinguish sparks. Additionally, this also seems to directly contradict a different ruling (Shabbat 120b) stating that it is permitted to construct a boundary of water-filled vessels around a fire on Shabbat such that when the fire nears the vessels, they break and the water that they contain then extinguishes the fire. The question is why is this second case, also seemingly involving indirect (‘grama’) actions, permitted, while the case in our Mishna which seems even more far-fetched is forbidden?

Seemingly conscious of this question, Rav Ashi explains that our Mishna is not concerned that ‘[the water] will extinguish the sparks’ (i.e. the role of the ‘cheftz’ – item), but rather, that the presence of the water in the plate or bowl ‘increases the possibility of someone actively extinguishing’ (i.e. the role of the ‘gavra’ – person). What this means is that while the case in Shabbat 120b addresses גרם כיבוי – indirect acts that lead to the extinguishing of a fire, this case in Shabbat 47b addresses קירוב כיבוי – specific acts that increase the likelihood that someone will directly extinguish the sparks of a fire. And why, in this specific case, are we so concerned by קירוב כיבוי? Perhaps it is because while it is known that extinguishing a real fire is prohibited on Shabbat, some consider sparks of fire as being inconsequential (as possibly reflect in the rabbinic statement on our daf that ניצוצות אין בהן ממש), and thus are therefore more likely to actively use the water underneath the lamp to extinguish the sparks.

Based on this reading of the Gemara what we see from here is that just as Jewish law requires an understanding of the physical behaviour of water-filled vessels that are approached by a raging fire, it also requires an understanding of human behaviour and what a person may likely do if a plate or bowl of water is within easy reach when they see a spark fly from a lamp on Shabbat.