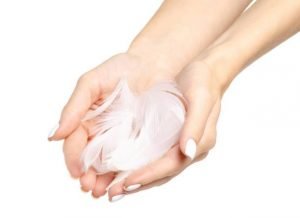 In today’s daf (Shabbat 49a) we are taught in a Mishna that it is permitted to insulate a hot pot of food for Shabbat with clothing, with produce (e.g. wheat or beans), with dove’s feathers, with sawdust or with flax combings.

Ordinarily, we would expect the subsequent Gemara to discuss one or more of the cases raised in the Mishna. But though the Gemara eventually does so, it begins by citing a seemingly unrelated story involving אלישע בעל כנפים – ‘Elisha the winged one’ which is the name attributed by the Rabbis a particularly pious man called Elisha who lived in Israel during the time of the Roman persecution and who was uniquely committed to the mitzvah of tefillin. As the Gemara then explains, during that time Roman’s decreed against Jews wearing tefillin and said that all those found doing so would be killed by having their brains pierced! Yet notwithstanding this frightening threat, Elisha went out to the marketplace while wearing his tefillin, but on one occasion, a Roman officer saw him. Elisha ran but the officer pursued him, and as the officer came near to him Elisha took of his tefillin and held them in his hand.

“What is that in your hand?”, demanded the officer, to which Elisha replied “The wings of a dove”. Being compelled by the officer to confirm his story Elisha then opened up his hand and instead of holding his tefillin, he was holding wings of a dove. The Gemara then asks, ‘And why wings of a dove rather than some other bird?’, and it answers that this is because Knesset Yisrael (which, as Rav Soloveitchik explains, is the term used to describe the mystical entity of Am Yisrael) ‘is compared to a dove, as it says ‘[you will be] like the wings of a dove’ (Tehillim 68:14) – and just as a dove is protected by its wings, so too [Knesset] Yisrael is protected by the mitzvot that it performs’.

As one would expect, this miraculous story of אלישע בעל כנפים has attracted much exquisite commentary. However, far less attention has been given to the relationship between the Mishna and the Gemara, and while the Artscroll commentary suggests that ‘since the Mishna mentioned dove’s feathers, the Gemara cites an unrelated teaching in which dove’s feathers also figure’, I believe the relationship goes far deeper. Let me explain.

This chapter is titled במה טומנין, ‘with what may we insulate’ and it explores the various materials that may be used to wrap around food to keep it warm for Shabbat. And then we are introduced to אלישע בעל כנפים who was uniquely committed to the mitzvah of tefillin – a mitzvah that literally is all about wrapping things around the body. This is our first case of הטמנה (insulating) in the story, and it teaches us that the mitzvot that we perform spiritually warm us and protect us – as evident from the story where it seems that Elisha’s total dedication to this mitzvah protected him from the dire threat of the Romans.

Then Elisha removes his tefillin and wraps his hands around them. This is the second case of הטמנה (insulating) in the story, and it teaches us that just as the mitzvot protect us, we too must protect the mitzvot as well as our sacred mitzvah items.

Finally the Gemara explains the symbolism of the dove and informs us that ‘just as a dove is protected by its wings, so too [Knesset] Yisrael is protected by the mitzvot that it performs’. This is the final case of הטמנה (insulating) in the story, and this tells us that we – as members of Knesset Yisrael, the mystical entity of Am Yisrael – have the unique ability to spiritually warm and protect each other by the mitzvot we perform.