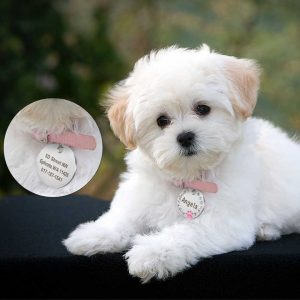 Today’s daf (Shabbat 52a) continues its discussion of the previous Mishna (5:1, 51b) concerning the use of a halter or a leash on an animal on Shabbat, and whether a halter or a strap – whose primary purpose is not for pulling an animal but instead for adorning an animal – may be worn by an animal in a public domain.

Based on the principle found in the Mishna that ‘all animals that [normally] wear a collar may go out with a collar and may be pulled with a collar’, the Shulchan Aruch (OC 305:5) rules that dogs and other small animals may be taken out on a leash on Shabbat, and based on the conclusion in our daf concerning decorative straps, the Shulchan Aruch (OC 305:1) rules that anything that is for decoration and not required for controlling an animal may not be worn by an animal when they go out [in the public domain] – which seemingly includes items worn for the purpose of identifying an animal (ibid. 305:17).

In light of these sources, Rabbi Yechiel Michael Epstein (Aruch HaShulchan OC 305:5) raises the question whether an animal may go out with a separate name collar or name tag on Shabbat since this is not essential to restraining the animal and since it may be claimed to be comparable to a decorative item. Though Rabbi Epstein acknowledges that animals without name tags may be presumed to be ownerless, and though he mentions the fact that, if captured, a [seemingly] ownerless animal may be killed by the authorities, he believes that an animal may not wear a name tag in the public domain on shabbat.

However, in his Shmirat Shabbat Kehilchata (27:9 footnote 33), Rabbi Yehoshua Neuwirth cites a ruling that he heard from Rabbi Shlomo Zalman Auerbach with an alternative approach: ‘because going out to a public place is for the benefit of the dog, the name tag is itself considered a benefit to the animal as it protects the animal from the authorities killing it [were it to be found without a name tag]’. Thus, according to this reasoning, an animal may wear a name tag for reasons of self-protection. Reflecting on this reasoning, Rabbi Howard Jachter* makes a reasonable deduction that ‘Rabbi Auerbach’s ruling appears not to be limited to tags worn to prevent the animal’s death [and] it seems to apply to any tag worn for the benefit of the animal such as identification tags which allow the animal to be returned to its owner in case it is lost (provided that it is in the animal’s interest to be with its owner)’.

Finally, Rabbi Auerbach concludes with an important caveat: ‘if the only reason why [the animal is wearing a tag] is in order to make sure the owner avoids paying a tax [on animals kept without a nametag], then in this instance the tag is solely for the benefit of the owner and it would seem that it would be forbidden for the dog to wear a tag’.

* see his essay titled ‘Halachic Perspectives on Pets’ at http://www.daat.ac.il/daat/english/halacha/jachter_1.htm