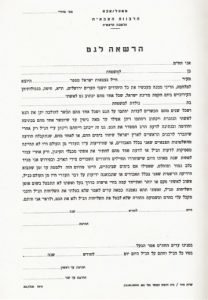 In today’s daf (Shabbat 56a) we are told that an edict was made during the period of King David that the (male) soldiers who went out to war wrote a bill of divorcement for their wives. This means that before going to war, any married soldier would write a conditional ‘War Get’ (writ of divorce) to his wife so that if he died on the battlefield and his death was not be confirmed, his wife would be divorced through this document and avoid becoming an aguna.

Significantly, from the Biblical period until the 19th century we have no record that a ‘War Get’ was used, with the first example of its usage in the modern period being a letter received by Rabbi Naftali Zvi Yehuda Berlin from a man who went to fight in the Russo-Turkish war who, prior to leaving, gave his wife a war get.

However, by the early 20th century there was an increase in the usage of the ‘War Get’ in the months prior to World War I. Even more significantly is the fact that in the months leading up to World War II, Chief Rabbi Herzog wrote to Rabbi Chaim Ozer Grodzenski explaining how ‘we should prevent the evil as best we can in terms of agunot of Jewish women. This matter will literally impact the lives of thousands of Jewish women’. Given this, he suggested the adoption of a halakhic model proposed by Rabbi Malkiel Tanenbaum whereby soldiers appointed others to write a ‘get’ to their wives after a period of two years from when they left for war if they did not return. This model – known as a Harsha’a – was preferred to the classic ‘War Get’ due to the fact that the latter would be revoked on each occasion that a husband would return home between battles. Rabbi Herzog drafted a suitable document for soldiers in the British Army to sign, and, as the war proceeded, he refined this document even further. During the war numerous European Rabbis turned to Rabbi Herzog to use this form, and records show that over 2,000 soldiers signed such a form in the conscription office in Tzrifin during the Second World War – despite it being entirely voluntary.

Perhaps the most compelling piece of testimony concerning this halakhic device was related by Rabbi Professor Louis Rabinowitz who was the senior Jewish chaplain to the British Army during World War II. He explained that during Pesach 1943 he received an urgent telegram from Chief Rabbi Herzog informing him that a group of 140 Jewish soldiers had left to fight without having previously signed a war get which Rabbi Herzog had urged all soldiers to sign. Rabbi Herzog pleaded of Rabbi Rabinowitz that he find the soldiers and ensure that they sign these forms.Eventually he did find them and he collected their signatures. Shockingly, the next day their ship sank. Thanks to the efforts of Rabbis Herzog and Rabinowitz the widows of these soldiers were released from aginut. As Rabbi Rabinowitz remarked, ‘my only consolation is that I managed to do as Rabbi Herzog so fatefully requested of me.’

Given all this one would expect that every married soldier in the IDF would be expected to sign a ‘War Get’, and in March 1948 Ashkenazic Chief Rabbi Yitchak Herzog and Sephardic Chief Rabbi Ben-Zion Uziel issued an order to the newly appointed military Chief Rabbi Shlomo Goren that this be done. However, for a variety of subjective and halachic reasons, Rav Goren did not do.

Sadly, the need for a ‘War Get’ was proven just months later during the battle of Gush Etzion in May 1948, and until the bodies of those murdered were retrived in November 1949 many women remained agunot. Blaming Rav Goren for his failings they issued a formal complaint to Rabbi Herzog against Rav Goren. In his reply, Chief Rabbi Herzog validated their complaint, expressed his anguish that this was not done, and noted how ‘we the Chief Rabbinate of the Land of Israel sought to advance and establish permission for a ‘get’ to be written and signed in any case of a man going to war, but due to the lack of a military order this was not implemented in most cases’.

It is often said that we need solutions to hard problems. However, quite often we have at least some solutions to some hard problems, but for a variety of reasons they are not effectively implemented. In terms of this case I believe that the failure to implement the ‘War Get’ among the soldiers of the IDF is one of the great moral failings of our past, and one that should be corrected for our future.
×
×